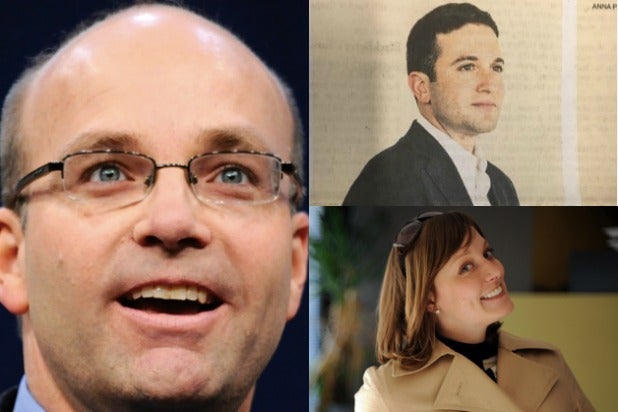 After nine years, Politico chief White House correspondent Mike Allen will hand off oversight of the political outlet’s famed Playbook to staff writers Anna Palmer and Jake Sherman on July 11. The newsletter will still brief readers on “what’s driving the day in Washington,” but don’t expect it to look exactly the same.

“The news cycle has obviously changed since Playbook was first created, so we want to make sure we win the morning but also own the day,” senior Washington correspondent Anna Palmer told TheWrap.

Palmer and Sherman plan to incorporate social media and audio into Playbook’s already prominent brand, having spent several weeks preparing to “expand the ecosystem” once they officially take control of the newsletter.

“Mike has been a friend and mentor and encouraged us to take the job. We’re very excited in terms of looking at where we want to take the product,” Palmer said. “We want to continue making the newsletter a must-read in Washington … we also have designs on how to modernize [Playbook].

This fall, Politico plans to launch Playbook Plus, a website similar to the original newsletter that will allow Palmer and Sherman to update Playbook readers around the clock as news breaks.

The duo also plans to launch 90-second audio clips featuring the most important info for those in the Playbook audience who don’t have time to read the entire newsletter.

Also Read: How Politico's Playbook Will Go on Without Mike Allen

“We want to meet our readers where they are. People love the newsletter, and the newsletter is the centerpiece of the franchise, but people are consuming news everywhere and we need to make sure that we serve them in a way that’s useful to them,” senior writer Sherman told TheWrap. “We don’t want them to have to run to come to us. We want to go to them, where they are.”

The Playbook franchise has already grown beyond Allen’s individual voice. Politico has launched additional versions in Brussels, Florida, New York, Massachusetts, Illinois and California, each with its own tone and style. However, Palmer and Sherman are Politico veterans who understand the importance of Allen’s version.

“Once it was clear that Mike was moving on, Anna and I jumped at the opportunity,” Sherman said. “It’s like growing up in the Bronx and becoming the first baseman for the Yankees.”

Daniel Lippman, who worked with Allen for the past two years, is going to stay on the team.

“He’s the bridge for us to a lot of the Playbook community,” Palmer said before Sherman chimed in, “He knows the community well and they’re very comfortable with him.”

Allen, who is known as an insomniac workaholic, has set a high bar by creating what is essentially a guidebook for the day in politics, but the new Playbook team feels it’s up to the task.

“We’ve both covered Congress in the past so we’re used to working long hours,” Sherman said. “This place attracts a certain kind of person that loves to work hard and grind. That’s what we’re going to do.”

Sherman wants to make sure Playbook is the “connective tissue for not only D.C. but power players in L.A., San Francisco and New York” because “D.C. doesn’t operate in a vacuum.”