“You have to look at these artists as small businesses. It’s going to be devastating,” Loeb & Loeb partner and music lawyer Derek Crownover says

Music attorney Tim Mandelbaum had to be at an Allman Brothers concert at Madison Square Garden on the night of March 10, at the behest of his client, longtime Allman Brothers guitarist Warren Haynes. It was a big deal: The band was celebrating 50 years, but Mandelbaum couldn’t think of anywhere he wanted to be less.

It would be the last live concert at the “World’s Most Famous Arena” before the coronavirus pandemic cut the mics and turned the stages dark.

Mandelbaum, a partner at Fox Rothschild, couldn’t even scalp his tickets outside of the arena. His plus-one had bailed; he ended up staying for two songs before the insanity of sitting in a closed arena full of people at the onset of a deadly virus sweeping the country forced him to leave. “I just thought, ‘This is so not the place to be right now,'” he said.

With the coronavirus pandemic’s continued chokehold preventing artists from touring the globe and performing in sold-out venues to massive crowds, the music industry stands to lose tens of billions of dollars.

“Really, it was almost a metaphor for what’s happened in our industry,” Mandelbaum said of his final concert night in March. “From that day forward, the live music business of our industry… it’s not even just down: It’s nonexistent.”

March saw virtually all major music festivals, from Coachella and Stagecoach to Ultra Music Festival and SXSW, either cancel or postpone their events. Artists like Billie Eilish, The Rolling Stones, Harry Styles, The Wu-Tang Clan and Taylor Swift were forced to shelve tour schedules in hopes of being back on stage in 2021.

The overall financial hit to the industry, at this point, is nearly impossible to get a handle on, experts say. But for many musical artists, touring makes up the largest slice of their revenue, and according to PricewaterhouseCoopers’ 2017-2021 entertainment and media outlook report, live music is a $26 billion business — and growing. 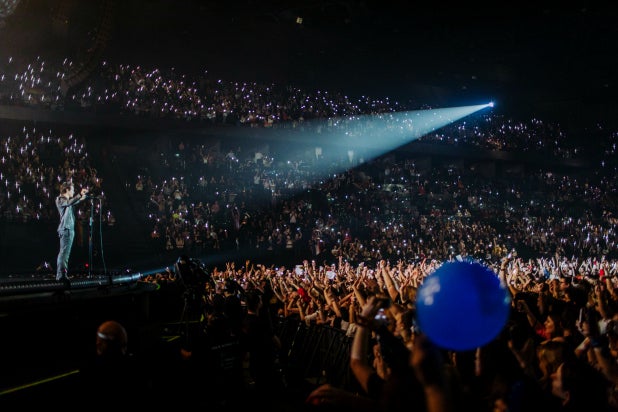 Live Nation, one of the largest concert and ticketing operators in the world, on Wednesday reported it lost $588.1 million in the second quarter, which covered April through the end of June.

“Over the past three months, our top priority has been strengthening our financial position to ensure that we have the liquidity and flexibility to get through an extended period with no live events,” Live Nation CEO Michael Rapino said.

Rapino added that the company is confident that concerts will return at scale next year, but for the second quarter of 2020, concert revenue was down 95% year-over-year. The concert business finished the quarter with a loss of $280 million and a loss of $267 million in the ticketing segment.

“We’re already seeing some folks at major labels trying to renegotiate their deals to hopefully get some relief,” Loeb & Loeb partner and music lawyer Derek Crownover said. “Touring for years has been the way most artists make their living.”

For a lot of artists, Crownover said, especially those who maybe don’t write their own songs, getting revenue from merchandise or sponsorships, touring and being on the road can be upwards of 80%, sometimes 90% of their annual income. Even for major artists, it could be a substantial chunk — anywhere from 40% to 60%.

On top of that, there are so many other career musicians, roadies and production crews reliant on artists being able to tour.

“You have to look at these artists as small businesses,” Crownover said. “It’s going to be devastating.”

One positive has been the boom in music streaming, experts say. Taylor Swift’s surprise album release of “Folklore” late last month, for example, set a new 24-hour streaming record on Apple Music and Spotify, where it was streamed 80.6 million times. The album sold a reported 1.3 million copies worldwide in the first 24 hours, according to Republic Records, and in the U.S., on-demand streams exceeded 72 million in the first 24 hours. That broke a record previously set by Ariana Grande’s 2019 album, “thank u, next,” which garnered 55.9 million streams.

But even then, streaming success can’t make up for the revenue lost due to the absence of live concerts. 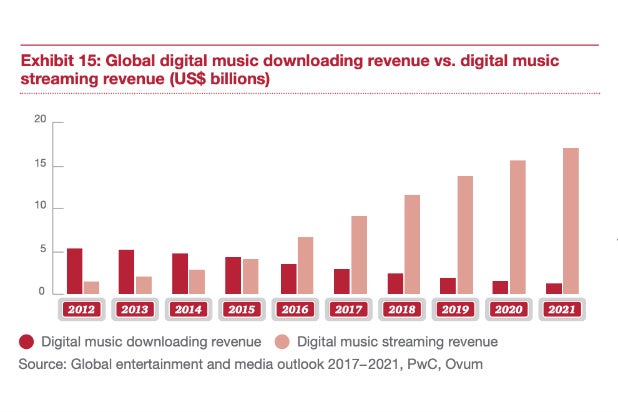 On Monday, Sony Corp. reported revenue for its music division fell 12% to $1.7 billion (JPY177 billion) from $1.9 billion (JPY202 billion) during the same quarter a year ago. The music giant said that while streaming music revenues enjoyed a slight bump, it couldn’t offset the negative impact the pandemic has had on its business.

“Revenue in most categories, including from physical media and advertising-supported streaming services, is being negatively impacted by the spread of COVID-19,” Sony management said during a conference call with investors. “Overall streaming revenue only grew 6% year-on-year on a U.S. dollar basis during the quarter, but audio streaming revenue, of which paid streaming accounts for a large portion, grew 17%.”

Sony said that in the music publishing space, revenue from all areas except for streaming — such as music licensing for movies and television — is being significantly negatively impacted by the spread of COVID-19.

“More and more, artists are realizing they can put out music on their own, so streaming has changed the fortune for a lot of artists,” Mandelbaum said, “But touring still remains the preeminent form of generating revenue.”

A wrinkle in the potential future success of streaming for artists and their teams has been the ongoing battle between music industry publishers and streamers like Spotify and Google Play, which appealed a recent decision by the Copyright Royalty Board that would improve the licensing rights and rates for artists and publishers.

“There’s probably more value in music right now than is being captured,” Crownover said.”I’ve never seen this much digital opportunity in the music business in my 26 years.”

The industry has moved surprisingly fast to attempt to capture that opportunity. Much like other aspects of the broader entertainment landscape, once artists began to shelter in place, as tours were canceled and with no way to reach fans, they took to social media — putting on little shows and performances on Instagram Live.

Taylor Swift used the time to produce and release an entire album. Swizz Beatz and Timbaland started a sort of a grassroots rap battle, Verzuz, where two artists go head-to-head. What became a wildly popular Instagram Live staple, is now a production in partnership with Apple Music.

The experts and insiders TheWrap spoke to say there are a lot of conversations around how and whether streaming concerts can be a thing of the future. Mandelbaum said numerous proposals for virtual concerts have come across his desk. Lollapalooza in Chicago livestreamed its entire festival last month.

Music agents at WME even sent emails to their network saying that they were putting together a database of venues offering livestream capabilities, asking what a deal and offer typically looks like, so they could stream shows for clients. 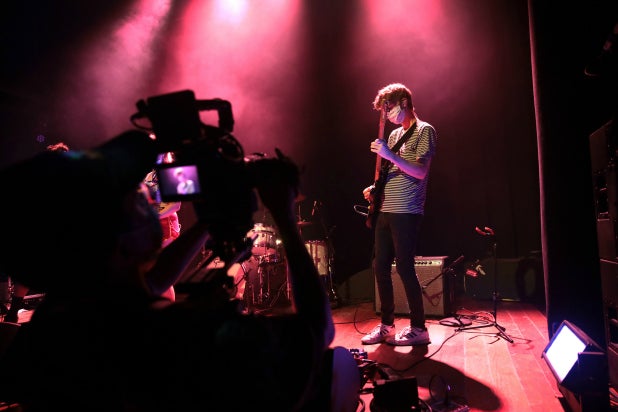 “Virtual concerts have proven to be in huge demand with fans, so we established the ‘Live From Home’ platform to provide a convenient place for fans of all types to find performances from their favorite artists,” Rapino said. “Given the tremendous popularity of these shows, we are seeing the potential for livestreaming to become an additional long-term component of our concert business, allowing fans in other cities, or those who can’t attend, to enjoy the concert as well.”

When it comes to the economics in the long run, Mandelbaum said virtual concerts make the most sense as an additive to revenue rather than a replacement. Plus, it doesn’t compare to being with a crowd in a sold-out arena.

“It’s a half measure and a Band-Aid,” Mandelbaum continued. “I don’t think it makes up for the live experience and it’s not going to make up the revenue you lose out on when you’re doing 50, 75 shows — the ticket prices, the per head count on merchandise. It would have to be more innovative than that to be sustainable.”

Without touring and live music, a vital part of the music industry ecosystem is missing. If artists can’t tour, venues stand dark, promoters, agents and festival and concert organizers are also out of work.

“We have dates booked in October, but slowly but surely those shows are moving to later dates in 2021,” Jon Halperin, a talent buyer for Goldenvoice venue The Glasshouse, said. “What we’ve been told by our owner, Paul Tollett, is that we’re not opening until we’re 100%. We’re not going to open if shows can only be at 20% capacity, we’re going to open at 100% when everyone can fully experience the show and we can do a proper show with proper guarantees and whatnot.”

Overseas, unlike in the U.S., some countries that have the coronavirus more under control have started to allow larger gatherings that could make sense for live shows. For the music industry, getting back to putting on concerts and festivals is all about scale.

Whereas companies in the moviegoing business say theaters can operate profitably at less than 50% capacity, the economics for the music industry really only work when a venue is packed or as close to it as possible.

For big arena concerts, where tickets are traditionally sold farther out from the show than say a festival, the number of tickets sold can often determine the level of production. The fewer tickets there are to be sold, the more pared down the show is.

Mandelbaum said that moving forward in the near term, he sees the live music business as a significantly scaled-down version of itself.

“We’re not going to see the same enormous productions … it’ll be something simpler, I just don’t think the economy will support that,” he said.

The consensus seems to be that by the summer of 2021 or as late as 2022, the industry is expected to rebound, provided there’s a vaccine and live music is permitted. Exactly when could it get back to full force? Well, that’s the $64,000 (or perhaps $26 billion) question.

Even when concerts are allowed to resume, there’s the question of what happens if someone does contract coronavirus; who’s liable?

“In theory, if we’re able to open at 100% capacity, it should be safe to go to a show, but that’s a whole other question on liability. If you go eat at a restaurant and you get sick after eating at that restaurant, is that restaurant going to be responsible for not protecting you from COVID or is there going to be liability waivers at every establishment where there’s more than one person?” Halperin said. “If someone comes to the Glasshouse for a show and gets sick, are we responsible? Are we gonna get sued?” 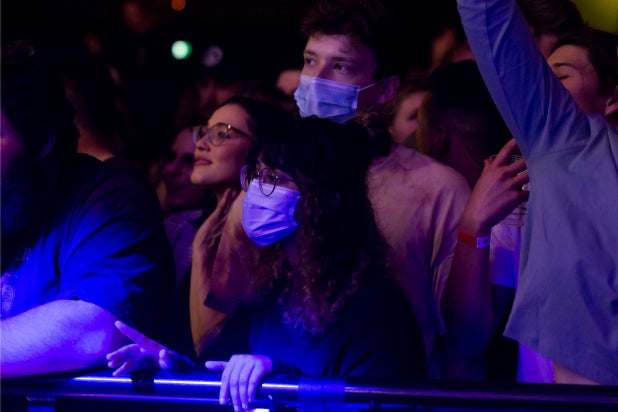 Typically, Mandelbaum said, when someone agrees to the terms of buying a ticket they’re assuming a lot of risks. Coronavirus does, however, present a whole new set of complications and will likely warrant additional liability clauses. A new Republican relief proposal making its way around Congress does include some liability protections for businesses.

But by nature of this being a once-in-a-generation type of event (here’s hoping), there are still so many uncertainties in terms of how it will shake out and what kind of a precedent will be set. Mandelbaum and Crownover said right now insurance companies want no part of it, and there’s no guarantee that just because a concertgoer signs a waiver, there wouldn’t still be litigation if they were to go to a show and contract the virus. “Then you’re talking about a promoter taking on a lot of risk,” Crownover said.

Halperin, who also manages an Australian hardcore metal band Dregg, said the band is booked for festivals as early as January.

Nate Jackson contributed to this report. 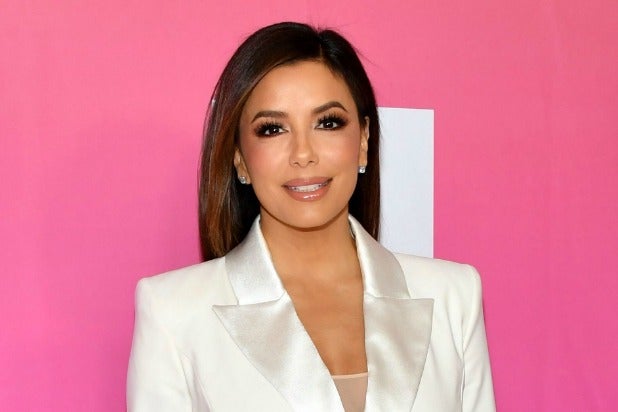 Eva Longoria to Direct and Star in ‘Spa Day’ at Sony 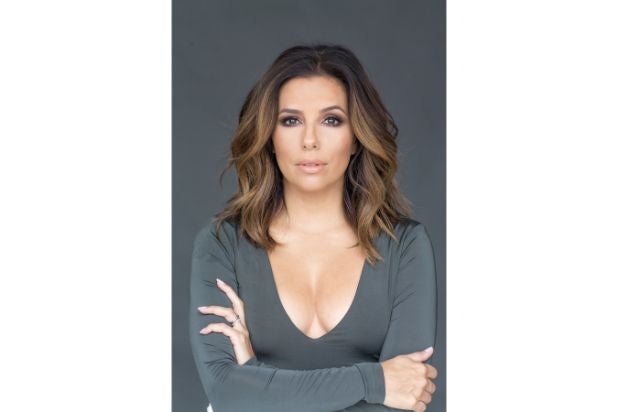 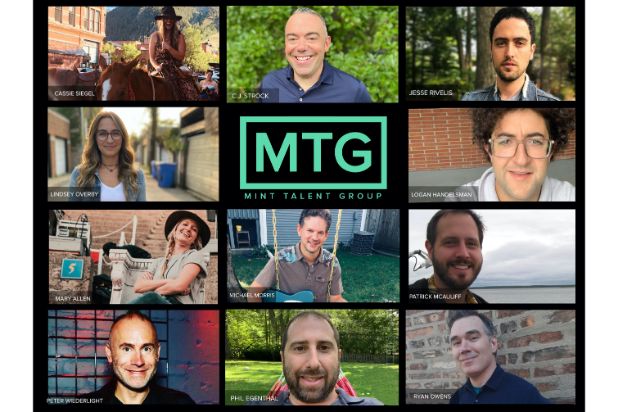 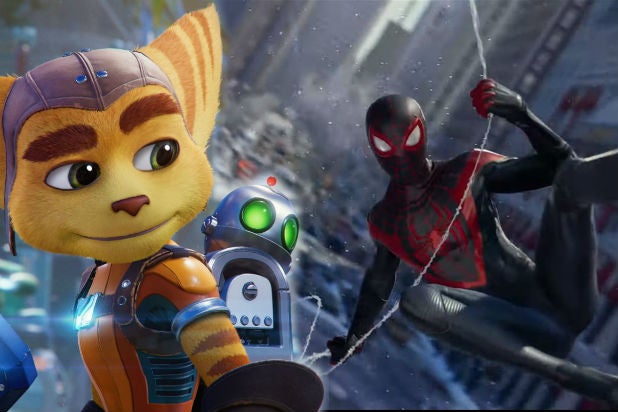 Everything to Know About the New PlayStation 5 Console 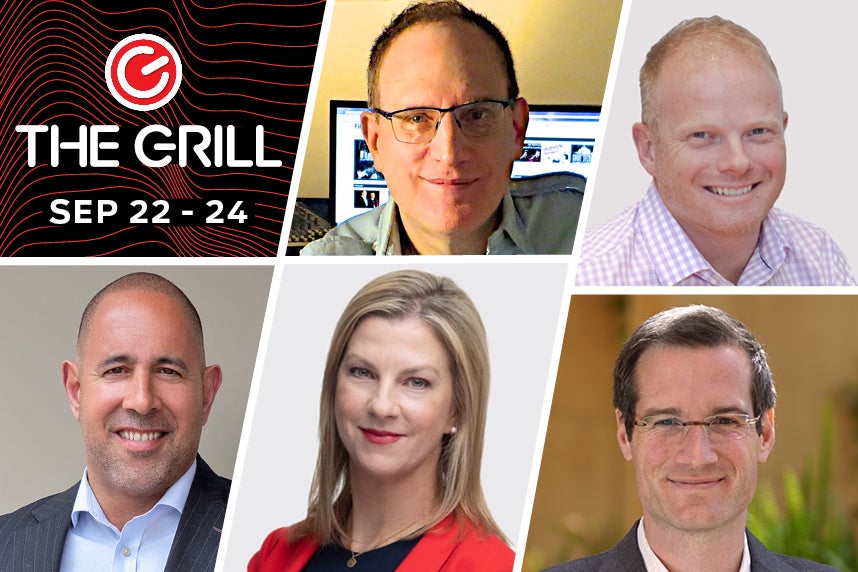 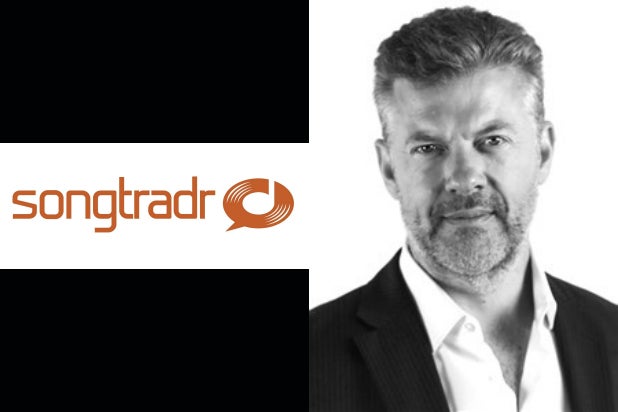 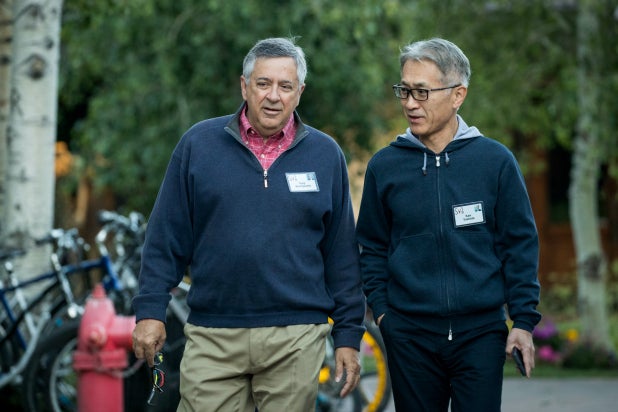 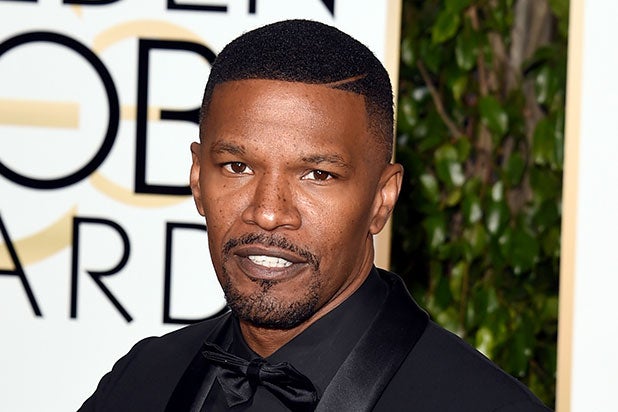 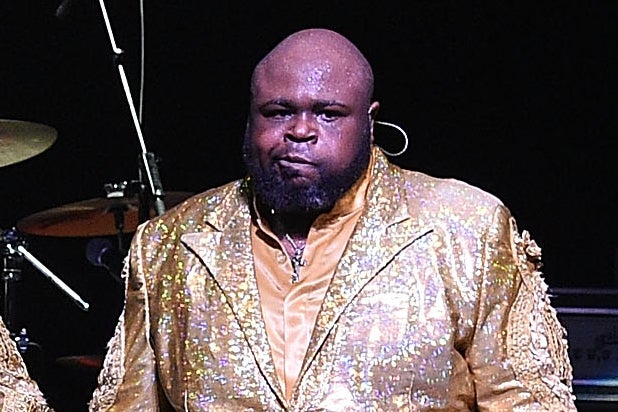 Bruce Williamson, Former Lead Singer of The Temptations, Dies at 49 of COVID-19 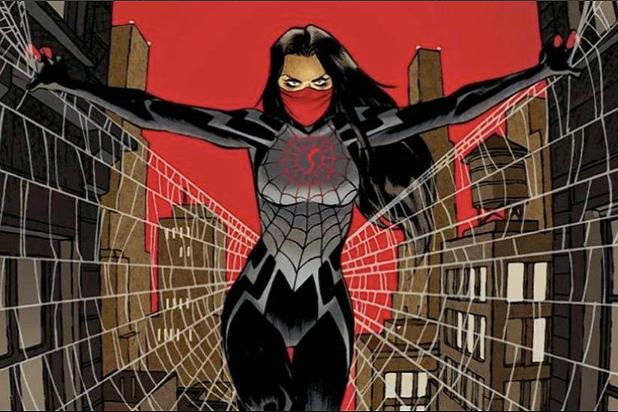