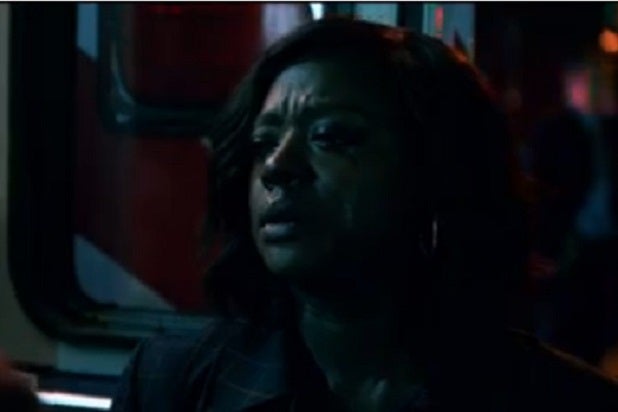 (Spoiler alert: Do not read any further if you don’t want to know what happened during the Sept. 29, 2016 episode of “How to Get Away With Murder.”)

After being teased with a cliffhanger death on last week’s episode, “How to Get Away With Murder” fans at least received some partial answers during the latest episode. But that failed to pacify many viewers, who reacted with frustration that they would likely have to wait much longer to be fully enlightened.

On the season premiere of the Shonda Rhimes series last week, fans were shocked by an episode-ending cliffhanger, when, in a time-jump scene, Annalise Keating (Viola Davis) arrived home to find a crowd gathered outside and a sheet-covered body being wheeled out.

Also Read: 'How to Get Away With Murder' Premiere Cliffhanger Puts Fans in Meltdown Mode

During, the scene, the sheet is partially lifted, showing Keating — but not the audience — who the corpse was.

The second episode of the season revealed that Oliver Hampton (portrayed by Conrad Ricamora) had made the cut among the living.

The revelation did as much to frustrate as it did to relieve many viewers, who hit up Twitter to share their feelings on the reveal.

“Really? Y’all chose to show us that Oliver is still alive? Ain’t nobody worried about him,” went one complaint.

Also Read: 'How to Get Away With Murder': 9 People Annalise Keating Has Messed With (Photos)

Another fan put forth that Oliver’s continued existence was a no-brainer, given the anguished expression on Annalise’s face in the premiere episode.

“Wowwww .. they wrong for that tho .. we knew she wouldn’t be crying like that over Oliver,” the fan noted.

“BUT WHO IS THE DEAD BODY?!” another frustrated fan simply demanded to know.

To be fair, some fans did express their joy for Oliver, and his current status as alive.

Really? Y’all chose to show us that Oliver is still alive? Ain’t nobody worried about him. #HTGAWM pic.twitter.com/u5zFK649YL

Wowwww .. they wrong for that tho .. we knew she wouldn’t be crying like that over Oliver ???? #HTGAWM

BUT WHO IS THE DEAD BODY?! #HTGAWM #tgit

I’m sobbing uncontrollably I hate @conradricamora and @RestingPlatypus for being good actors ???? #HTGAWM

So Oliver is alive. There’s some incriminating evidence on the phone. Oliver has to wipe the phone. Noted. #HTGAWM #howtogetawaywithmurder pic.twitter.com/UUfAII0cph

'How to Get Away With Murder': The Characters Who Could Be Under the Sheet, and the Ones Who Are Cleared (Photos)

At this point, it’s wide open — and we’re tracking the possibilities

(Spoilers for "How To Get Away With Murder" are within, obviously.)

UPDATED on 11/17. In true "How to Get Away With Murder" fashion, the Season 3 premiere left us with a wild cliffhanger. So now we're dying to know: Who the hell is under that sheet? It's a question that may not be answered for a while, so for now, we'll take a look at the possibilities. And we'll keep this list updated as the season goes on -- each week one character will be confirmed Not It.