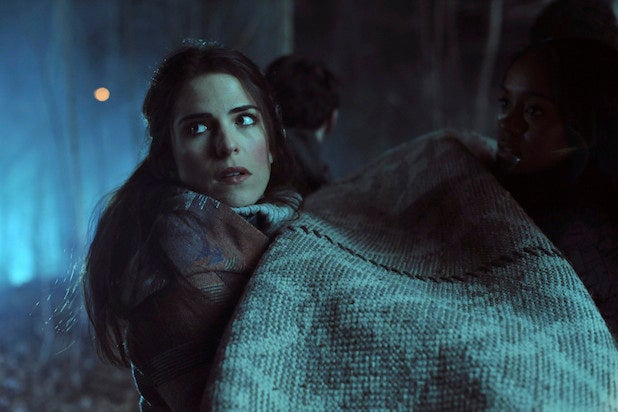 For a moment, it seemed like ABC’s “How to Get Away with Murder’s” Annalise Keating (Viola Davis) and her murderous gang were going to be able to ride the post-Sam storm. But, this is ShondaLand after all, where nothing is ever that easy.

The latest twist came in the form of Sam’s sister, played by Marcia Gay Harden. Hannah shows up at Keating’s door determined to find out what exactly happened to her two-timing brother, sending the law professor and her first-year law students into panic mode. Making matters worse, police have found the body of a man they believe is Sam.

“The stakes have risen once again,” Karla Souza, who plays Laurel Castillo, told TheWrap. “This is when the shit hits the fan.”

Souza gave TheWrap five twists and turns to expect on “How to Get Away with Murder.”

1. Into the woods
The last episode ended with the mother of all cliffhangers: Police may have found the body of a man they think is Sam Keating somewhere in the woods. That, of course, has everyone on edge.

“Whether or not it’s Sam’s body will obviously have everyone terrified to the bone,” Souza said. “We’ll also find out another clue in the woods that will lead to an arrest and that’s when shit hits the fan.”

2. More on Laurel’s background
Last week, we found out Laurel’s family is loaded. Unlike Michaela (Aja Naomi King) who’s all about fashion and money, Laurel has been sporting the girl next-door look.

“Laurel’s wardrobe has not given away the fact that she’s filthy rich,” said Souza. “She has a cold relationship with her parents. We see that she doesn’t have a Plan B. It makes her realize that she has to work her situation with Annalise because she doesn’t have a family to fall back on.”

Also Read: ‘How to Get Away With Murder’s’ Jack Falahee Won’t Reveal His Sexuality: ‘It Seems Reductive’

3. Annalise begins to unravel
Hannah’s arrival has clearly had an effect on Annalise, who seems to be unraveling. That has her students worried she might be too distracted to keep it together.

“In the next few episodes the possibility of Annalise vouching for herself and trying to save herself will make Laurel paralyzed. She’s not made out of stone for sure,” said Souza.

Also Read: 11 Funny Things We Learned From ‘How to Get Away with Murder’ Star Jack Falahee’s Twitter Q&A

4. Stress overload
After Hannah shows up to investigate Sam’s disappearance, things start to go south for the law students. The pressure of having to hide the murder is starting to take its toll, with Connor (Jack Falahee) and Michaela coming thisclose to turning in the rest of the group in order to save their own skin.

“Laurel continues to try and keep everyone together because she knows that a house divided cannot stand on its own,” Souza said. “She shares some of her stories to get them to share as well and open up, but who knows if what she’s sharing is real or is it something she just tells them to get them to share their secrets.”

5. Relationships deepen
Wes is having a hard time dealing with the murder. Being the one who actually killed Sam, he’s overcome with fear. Rebecca tried to comfort him, but nothing helps.

Also Read: ‘Scandal’ Mind Trip, ‘How to Get Away With Murder’ Secrets Exposed as TGIT Returns (Video)

“That relationship, let me tell you, watch out,” said Souza. “They try to be happy, but as you know it’s hard to find stability and happiness. You’re going to see that relationship develop, as well as all of our relationships develop. Wes is having nightmares and Laurel becomes that ally that Wes needs. You start to see those relationships deepen.”