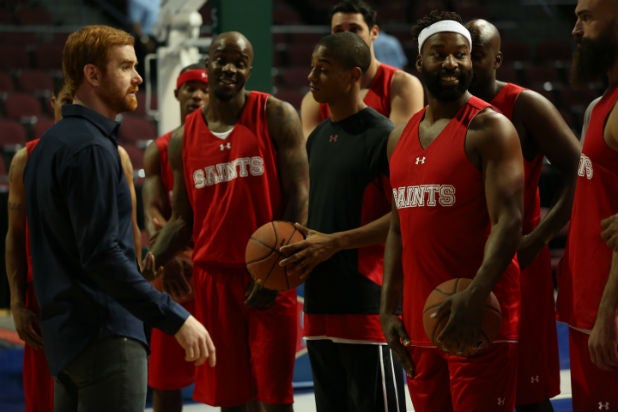 The worlds of sports and entertainment are increasingly colliding as athletes at the top of their game cross over into Hollywood, such as Ronda Rousey’s turn in “Furious 7,” and Tom Brady and Rob Gronkowski’s appearances in the upcoming “Entourage” movie.

It was also the rookie recurring role on a TV show for 35-year-old free agent Davis. “I’ve had cameos, but this is the first time I was part of the cast,” he told TheWrap. “I wanted to test my acting skills. It was a very different experience [from playing] as I had to be there every day and learned real respect for the actors. Just like playing basketball, it’s all about discipline, repetition and practice.”

Fortunately for the former LA Clippers and Charlotte Hornets point guard, he didn’t have to venture too far from reality to play Billy Crane, a retired player who takes a shot at a comeback after retiring to open a fast food restaurant. “My character’s life is pretty much like what I was going through at the time. Getting into that role was easy because I was retired and eating hamburgers,” he joked.

“I am now back on my diet; once I saw myself on camera I thought I should stop eating burgers, but it was good for the role at least,” said Davis, who hasn’t ruled out making an NBA comeback of his own. “It made me miss playing, being back on the floor with the lights — then I got to hit the game-winning shot, so it brought back lots of memories.”

Starring Andrew Santino as the millionaire owner of the titular “Sin City Saints,” Malin Akerman as a tough league executive and Tom Arnold as a Vegas bodyguard/fixer, the show offers a behind-the-scenes look at the back office of a professional basketball franchise and the drama on-and-off the court.

With the NBA playoffs tipping off April 18 it’s a stressful time for franchises, and “Sin City Saints” goes beyond the court into the boardroom — or the seedy Las Vegas Strip — having been inspired by real-life events such as last year’s scandal surrounding former Clippers’ owner Donald Sterling.

“There’s a great deal of interest in pro basketball and people love peeking behind the curtain,” executive producer Mike Tollin (“Smallville,” “One Tree Hill”) told TheWrap, explaining that the show is the ultimate workplace comedy.

“The comedy is raucous and bawdy, but at its core it is very grounded,” he said. “These are things that are in the sports pages every day.”

Tollin first conceived the idea a decade ago with executive producer Bryan Gordon and sold it to another network before it ultimately landed at Yahoo Screen, and the time gap contributed to a number of changes in how sports are portrayed on television. “What has happened since is that total convergence of sports and pop culture. There is an accessibility that never existed before because of the 24/7 news cycle,” he said. “We want to know what athletes’ lives are like, not just how many points they scored.”

The key characters also reflect the dot-com boom, according to writer Chris Case, and the pure narcissism of team owner Jake Tullus (Santino) was inspired by Internet moguls he’s met.

“These guys are lone wolves and are used to doing whatever they want. They are entrepreneurs who don’t play by any rules,” he said. And just like former Microsoft CEO Steve Ballmer, “If you want to be noticed and you have a billion dollars, then you buy an NBA franchise,” Gordon added.

Yahoo really “gave us freedom and flexibility because it lives somewhere in between the traditional and the edgiest of networks,” Case continued.

“A show about a professional basketball team in Las Vegas is particularly intriguing on Yahoo due to our major leadership and commitment to Yahoo Sports, Fantasy Sports and Tourney Pick’em,” Kathy Savitt, CMO and Head of Media for Yahoo added. “We are delighted with both the engagement of the series on Yahoo Screen and the excitement we see from fans on social media with our originals.”

“Sin City Saints” is currently streaming on Yahoo Screen. “Other Space” from Paul Feig will launch on April 14.