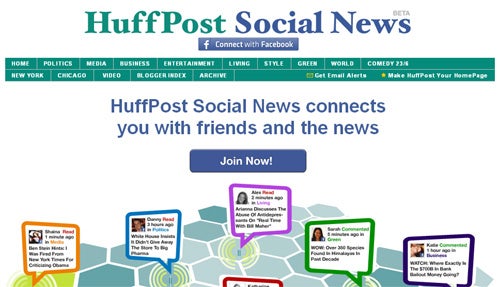 The Huffington Post announced on Monday the launch of something called “HuffPost Social News,” a collaboration between the sprawling blog, news and aggregation site and Facebook.

“Social media has fundamentally changed our relationship to news,” she said. “It’s no longer something we passively take in. We now engage with news, share news, react to news.”

The goal, said Eric Hippeau, HuffPo’s new CEO (and partner at Softbank Capital, one of the site’s chief investors) is “to make HuffPost Social News the go-to place for Facebook users to share news — both the stories they love and the stories they hate — with friends.”

Of course the other goal, he said, is to “appeal to marketers interested in reaching passionate, savvy readers who care about the news and who want to share their interests with friends.”

Monetizing social media has been largely elusive to most media companies, even those, like HuffPo, passionate and savvy about e-media.

And while something like this might appeal to marketers elsewhere, there are really few sites that have the scale and engagement – albeit largely spurred on by Fox News-hating liberals – that the Huffington Post can leverage.

The site had more than 1.7 million comments in July, Arianna said, with some stories attracting “more than 10,000 comments.” Put another way, that’s more comments than other sites get in page views.

It’s also another move by Facebook to get engagement and activity flowing in the opposite direction. Last week, the site spent $50 million to acquire FriendFeed.

In a post announcing the project to users, Arianna got reflective:

“I’ve always been obsessed with news. As the daughter of a newspaperman, I grew up with the smell of newsprint and the buzz of breaking news. I’ve also always enjoyed bringing people together from different parts of my life and facilitating interesting conversations. In the past, these have taken place around dinner tables, on group hikes or at book parties. Now, via cyberspace, those conversations have gone global. And they are happening in real time.”

She added: “The launch of HuffPost Social News today brings together my two loves: nonstop news and the passionate discussion of the news with my friends.”