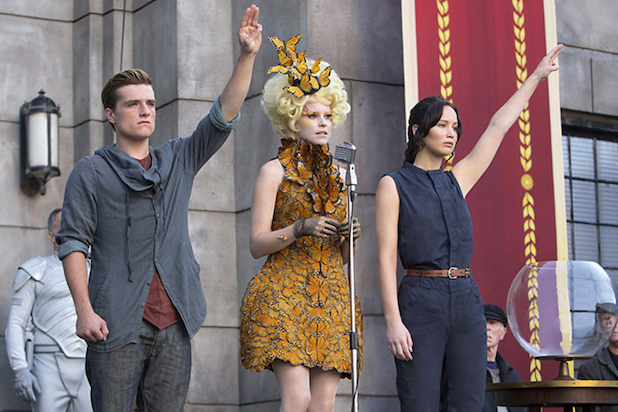 The massive opening of “The Hunger Games: Catching Fire” is igniting Lionsgate’s stock.

Shares in the studio closed Friday at $33.76, up 3.75 percent. They continued to climb in after-hours trading, with investors galvanized by the strong response from audiences around the world to the film adaptation of Suzanne Collins’ dystopian novels.

“The Hunger Games: Catching Fire” scored a huge $25.25 million domestic bow on Thursday night, according to studio estimates, the fifth highest grossing late night debut of all time. It is expected to generate between $160 million to $175 million over the weekend and is opening in such major international markets as Russia and China.

Overseas, the film has already racked up an estimated $32 million in the roughly 42 territories where it has debuted thus far.

Because Lionsgate is one of the few publicly traded “pure plays” when it comes to entertainment companies, its fortunes and its stock price rise and fall on the strength of film franchises like “The Hunger Games” or its upcoming “Divergent” series. Other Hollywood players like Comcast or the Walt Disney Company are conglomerates that are so heavily diversified into industries like cable, consumer products and theme parks, that films can bomb or soar without moving the needle on their share prices.

Lionsgate wasn’t the only beneficiary of a “Hunger Games” boomlet. Scholastic, which published Collins novels and has fielded more than 65 million copies of her adventure series, saw its shares jump 1.6 percent to close the day at $31.66, although its stock fell slightly in post-market trading.