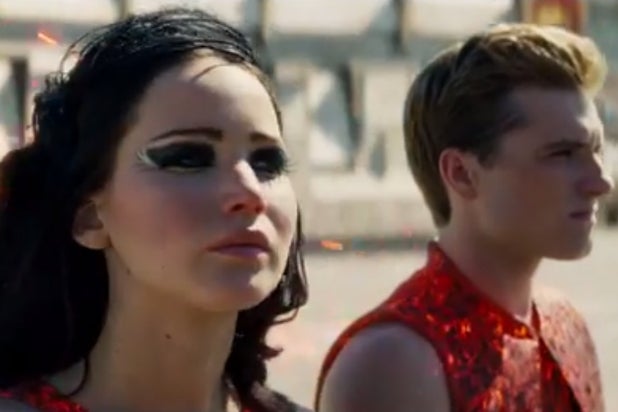 Black Friday shoppers swarmed the multiplexes as well as the malls, putting this year’s Thanksgiving weekend box office on its way to being the biggest ever. “The Hunger Games: Catching Fire” and “Frozen” have the holiday on a record-breaking pace, after huge Fridays.

Lionsgate’s Jennifer Lawrence sequel ran up a smashing $31.2 million and is now looking at a $110 million five-day haul that would shatter the holiday mark of $82.4 million set by “Harry Potter and the Sorcerer’s Stone” in 2001. It broke the record for the biggest Thanksgiving Day ever Thursday and has taken in more than $253 million domestically (and $482 million globally) since it opened last weekend.

And after its sizzling $26.8 million Friday, Disney Animation’s 3D family film “Frozen” should wind up with a five-day total north of $90 million, easily topping the previous best $80.1 million five-day debut of Pixar’s “Toy Story 2” in 1999. It will also be the biggest Disney Animation opening ever, ahead of another Thanksgiving release, “Tangled,” which brought in nearly $69 million in 2010.

With those two movies showing the way, this year’s long holiday haul could exceed $300 million, which would top the record set last year when “Twilight: Breaking Dawn Part 2,” “Skyfall” and Oscar contenders “Lincoln” and “Life of Pi” helped the box hit $291 million.

The weekend has been all “Catching Fire” and “Frozen,” so far. “Thor: The Dark World” will be a distant third and is likely to finish the five days and its fourth week at around $15 million. Three other wide openers – the Jason Statham-James Franco thriller “Homefront,” the musical “Black Nativity” and Spike Lee‘s “Oldboy,” are turning out to be box-office turkeys.

Open Road’s R-rate ‘Homefront” brought in $2.6 million Friday and will likely finish the five days in sixth at around $9 million. Fox Searchlight’s “Black Nativity” did $1.5 million and is looking at $5 million and eighth place for the long weekend. And FilmDistrict’s “Oldboy,” an R-rated vengeance tale starring James Brolin, is tanking. It managed just $341,000 Friday and will finish the holiday at around $1 million.

“The Best Man Holiday” and “Delivery Man” were running fourth and fifth. Universal’s romantic comedy sequel from Malcolm D. Lee brought in $3.4 million Friday and should finish with around $11 million for the five days. DreamWorks and Disney’s Vince Vaughn sperm donor comedy did $2.7 million Friday and will wind up at around $9.5 million in its second week.

Fox went nationwide with its World War II drama starring 12-year-old Sophie Nelisse and it brought in $1.9 million from 1,234 theaters, which puts it on track for $6.6 million and seventh place.

The Weinstein Company aggressively expanded its Judi Dench drama from four theaters to 835 locations and it brought in $1.3 million, good for ninth place.

CBS Films’ geriatric comedy “Last Vegas” was in tenth, after taking in $1.1 million Friday. It’s the company’s highest-grossing film ever, and should hit $60 million domestically early next week.