“The Hunger Games: Mockingjay – Part 2” is off to a strong start at the box office after a $16 million haul on Thursday night, but fans are actually showing signs of franchise fatigue on social media.

There were significantly less tweets mentioning Jennifer Lawrence‘s final outing as Katniss Everdeen than there were this time last year for “Mockingjay – Part 1.” According to BoxOffice.com, “Part 2” garnered 337,961 tweets in the week of Nov. 11 to Nov. 18, while “Part 1” boasted 442,874 tweets. “Part 2” recently added 127,279 likes to its Facebook page, but that fails to compare to the 531,170 likes the page for “Part 1” gained in the second week of November last year.

Although the Lionsgate release’s social media stats are leading this weekend’s competitors, including Seth Rogen comedy “The Night Before” and Julia Roberts thriller “Secret in Their Eyes,” there seems to be a bigger threat on the horizon in a galaxy far, far away.

BoxOffice.com senior analyst Shawn Robbins says this is the first time “The Hunger Games” has faced such stiff competition on social media — especially from a movie that’s still a month off.

“It’s unusual because ‘Hunger Games’ typically dominates the field by a wide margin on Twitter during its release week,” he said. “It says a lot that ‘Star Wars’ is on par with it during ‘Mockingjay, Part 2’s’ release week despite the former still being one month from opening. ‘Force Awakens” hype is clearly not being affected by anything else in the market.”

The decrease in social media numbers suggest there may be a bit of fan fatigue, even if they still shell out to see it in theaters. But they wouldn’t be alone. Both Lawrence and co-star Josh Hutcherson seem happy that the franchise is ending.

“I want to get back to my roots, back to indies, where I started,” Lawrence told Vogue in a recent interview. “This is my first time saying yes now that I am completely free of franchises. So there’s an elephant on my chest.”

Hutcherson told TheWrap last month, “It’s kind of nice to have my freedom again to take on any new projects I want.”

“For four years, I couldn’t work on a project in the fall time or when we were filming,” he added. “It’s nice to regain my freedom and move on to the next thing.”

“Hunger Games: Mockingjay – Part 2” opened Friday in North America, and has grossed $43 million around the globe so far. 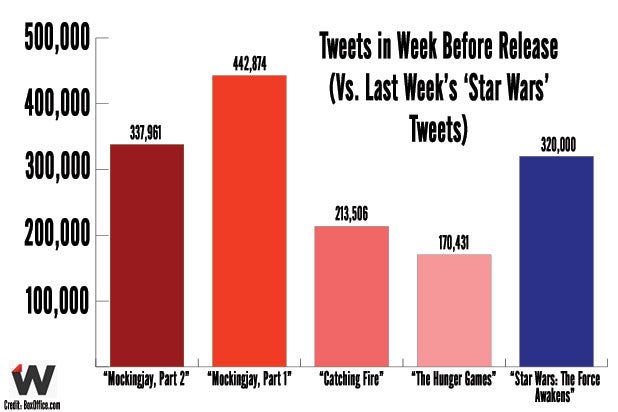 Katniss Shoots the Apple In the first movie, Katniss (Jennifer Lawrence) is ignored by the Gamemakers during a private session, so she takes up a bow and arrow, which she shoots through an apple in the roast pig's mouth.
View In Gallery
x