“I Saw the Light” opens with Tom Hiddleston as Hank Williams, sitting on a stool in a spotlight, his face downward and obscured by his ever-present cowboy hat. He’s singing “Cold Cold Heart” a cappella. It’s hauntingly beautiful; there likely won’t be a peep in the theater.

It’s also a highlight of a film that proceeds to nose-dive fast.

Writer-director Marc Abraham‘s second feature as helmer — he previously gave us “Flash of Genius,” a paean to the inventor of the intermittent windshield wiper — may as well be titled “Hank Williams Drinks, Flirts, Has Back Problems, and Occasionally Sings.” From the time it opens in 1944 to its conclusion in 1953 (the year Williams died, on New Year’s Day) Abraham never bothers to investigate what made the spina bifida-suffering country singer tick. The story is more about Williams’ relationship with his first wife, Audrey (Elizabeth Olsen), and subsequent women than, say, what drove him to drink or to become an entertainer in the first place.

Considering that most people are less familiar with the original Williams than with his son, Hank Jr., and grandson, Hank III, some background would have been helpful — or would have at least made you care about the imperfect stranger you’re watching onscreen. Instead, the film starts with him already on the rise. (Although, in one laughable line, he’s told, “Son, there are no shortcuts to the Opry!”) It’s also made clear that Audrey does not get along with Hank’s mother, Lillie (Cherry Jones), who refers to her daughter-in-law as a “divorcin’ bitch.” (Audrey had already been divorced and had a daughter when she married Hank.)

Also Read: Tom Hiddleston Makes Case for James Bond Role: 'I Would Not Take It Lightly'

And that’s about it. Hiddleston, who does his own singing, doesn’t get to show off his chops very often. But when he does, the film comes alive, particularly when Williams finally makes it to the Opry: The camera closes in on his ecstatic face as he croons and yodels and drives the gals wild. There’s also a tender moment when he and Audrey quietly sing the title song to their infant son as a lullaby. (Audrey’s pursuit of a musical career, despite her subpar vocals, is granted too much time here, with little consequence.) 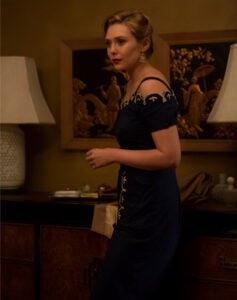 Despite the lifelessness of the script — Abraham’s adaptation of the book “Hank Williams: The Biography” runs a long two hours — the erstwhile Loki gives as good of a performance as the role allows; anyone who has an issue with the 35-year-old Hiddleston is playing someone who died at age 29, should take a glance at some footage of the real Williams and note that he looked about 50 throughout his career. Olsen, too, is a worthy co-star, her expressions fleeting as quickly as a single mother now hitched to an alcoholic would realistically change.

Each passing year is somewhat unnecessarily noted in text throughout the film, but all that chronicling merely makes the goings-on feel more like a slog. Even with heavy notation, some scenes are perplexing, such as when Audrey ends up in the hospital — she had an abortion, though that’s far from clear — or whenever she yells at Hank for making her “suffer” by, apparently, merely having a career. She seemed to complain more about him being on the road than about him being drunk.

Meanwhile, “I Saw the Light” is peppered with continual remarks about Williams’ less-than-angelic behavior. (Spoiler: He never, in fact, sees the light.) “Everybody has a little darkness in them,” he tells a reporter, who claims that he’s “just looking to give people some insight into you.” Or: “Boy, I’m a professional at making a mess of things.” Another woman post-Audrey remarks, “Hank, you are really screwed up.” He responds, “I know.”

The problem is that we don’t. At least not based on the scant evidence offered by this subpar biopic.