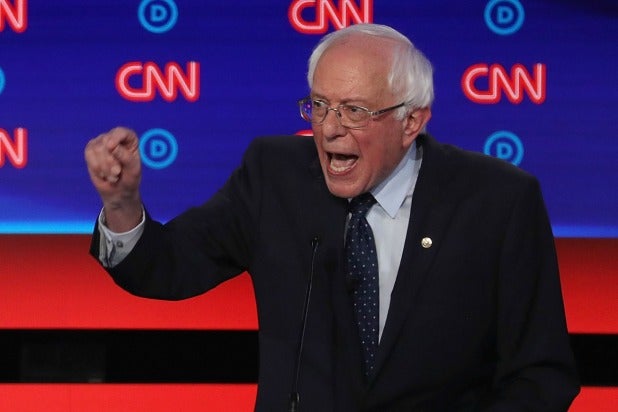 Sen. Bernie Sanders had strong words for Tim Ryan on Tuesday after the Ohio congressman claimed that Sanders couldn’t know whether Union members would get better health care coverage under Medicare For All than from their union plan.

During Tuesday night’s Democratic primary debate, Sanders said his Medicare for all plan would provide comprehensive coverage — particularly “dental care, hearing aids, and eyeglasses” for senior citizens. Ryan interrupted, saying “but you don’t know that. You don’t know that, Bernie.”

“I do know,” Sanders snapped back. “I wrote the damn bill.”

The Vermont senator continued by saying that rather than putting money into health care, union members’ companies could instead direct that funding toward raising wages for workers.

Don't tell me what's in Medicare for All. I wrote the damn bill! #DemDebate

Make a contribution and get our sticker now –> https://t.co/cGNDyKXZ5k

Filmed live at the Fox Theater in Detroit, Tuesday’s debate is the first of two, with the second coming Wednesday, July 31, beginning at 5 p.m. PT/8 p.m. ET each night. CNN’s Dana Bash, Don Lemon, and Jake Tapper are moderating both evenings.

The debate is currently airing on CNN.