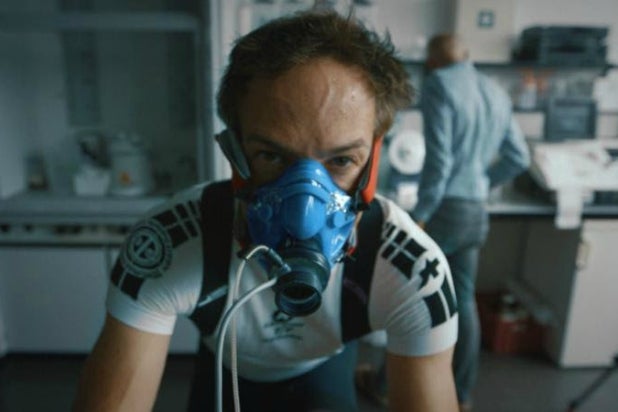 The recent turmoil in global sports over doped athletes, corrupt officials and tainted results has produced a pair of headline-grabbing supervillains in American cyclist Lance Armstrong — stripped of his seven Tour de France titles for doping — and current conspiracy poster-country Russia, which saw over a hundred of its athletes banned from the 2016 Rio Olympic games.

Playwright and amateur cyclist Bryan Fogel’s propulsive documentary “Icarus” is (accidentally, Fogel would admit) a convergence of those stories. What started as an attempt to see if he could get away with injecting himself with performance enhancers and not get caught became an unexpected dive into the heart of the Russian doping scandal that galvanized the globe last year. (Until Russia upped itself in meddling controversies with the American election.)

What Fogel didn’t count on when he began his quasi-larkish, semi-serious experiment in Armstrong-style cheating in 2014 was the baggage surrounding the scientist he was hooked up with to oversee his regimen: Dr. Grigory Rodchenkov, the head of Russia’s anti-doping lab, a blustery eccentric who would eventually expose himself in the summer of 2016 to the World Anti-Doping Agency (WADA) as the man at the center of his country’s pervasive athlete-doping program.

So while the first half of “Icarus” is driven by Fogel’s quixotic quest to artificially improve his cycling stamina and get away with it, the second half explodes into a full-on whistleblower thriller starring Rodchenkov, with Fogel tasked with protecting Russia’s own Edward Snowden. (It’s the movie’s nifty pitch, too: Wannabe Morgan Spurlock unwittingly becomes Laura Poitras.) In this case, of course, Russia is the opposite of the asylum it was for Snowden at the end of “CitizenFour,” with “Icarus” openly suggesting that Rodchenkov’s spilling of secrets has put his life in danger.

That makes “Icarus” a wildly timely movie for our current moment, as issues of cheating, illegitimacy and geopolitical bullies take center stage. At first, though, Fogel’s focus is in individual sport, and because he’s a longstanding amateur cyclist, it’s personal: How, he wonders, could someone like Lance Armstrong never fail a drug test while doping the entire time? With his eye on doing better at the notoriously difficult Haute Route multi-day race in the French Alps — amateur cycling’s toughest competition — and a theory that anti-doping systems are doomed to fail, Fogel sets up his experiment in performance enhancement and test evasion.

He’s put in touch with Rodchenkov, who runs WADA’s state-of-the-art Moscow lab and who agrees — mysteriously, considering the illicitness of it all, and that everything will be captured on camera — to advise and oversee Fogel’s regimen. A humorous montage of posterior injections, training, urine collection, and Skype sessions follows, whereby the caustically witty Fogel and the rumpled, gregarious Rodchenkov (who travels to L.A. to “smuggle” Fogel’s untainted urine back to Moscow) form an unlikely friendship.

When German television airs a documentary in late 2014 implicating Rodchenkov in a massive Russian doping program, spurring a WADA investigation, Fogel’s suspicions are raised about his project partner. But he trudges forward with his “Super Size Me”-style undertaking, even though the growing international swirl around the allegations about Russia adds a decided edge to Rodchenkov’s personality.

Fogel paces these sequences like he’s in a race already, and it soon becomes clear why: his Haute Route adventure, which culminates halfway through “Icarus,” ultimately takes a backseat to the Rodchenkov story, which heats up when he resigns from the Moscow lab and hightails it to the U.S. with a hard disk and a fear for his safety. Though having Rodchenkov narrate passages from “1984” is a tad much, the story he relates to Fogel’s camera about his life as the mastermind behind a statewide system of athletic doping paints an engrossing, disturbing and believable picture of years-long, high-level corruption and painstaking illegality.

As for the elaborate, surreptitious urine-swapping system deployed for the Sochi winter games, aided by the KGB — and rendered here with animation, so that it plays like a spy thriller — Rodchenkov states, “I pulled off 13 gold medals.”

See Video: Alex Gibney on Lance Armstrong Lying to Him: I Had to Investigate Myself

The rest of “Icarus” sees Fogel shepherding Rodchenkov through a gauntlet of lawyers, New York Times reporters, and the exile’s own guilt about his involvement. When the story breaks, and the IOC moves to ban Russian athletes from Rio, Rodchenkov is denounced by Putin, Russia’s Minister of Sport, and his homeland’s media, although reports of the sudden deaths of former colleagues tell a different story.

By the time “Icarus” reaches its sobering conclusion — with Rodchenkov in protective custody, and WADA’s findings in line with his expansive tale — Fogel has made us feel we’ve come a long, treacherous way from his initially impish idea about cheating at sports. Though the documentary’s early musings about athletic integrity in general are ultimately usurped by a tale of personal responsibility and nefarious global power, the disruption feels acute and essential.

As unwieldy as “Icarus” is with its rollicking events, figures and details, it could easily be read as an unsettling harbinger of destabilizing times to come, when the might of ill-meaning people in power has the capacity to veer any of us off-track.