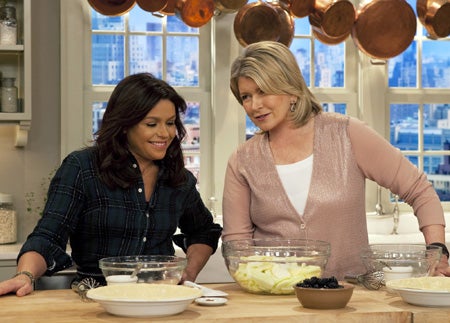 The rivalry between Martha Stewart and Rachael Ray isn’t quite on par with, say, Yankees-Red Sox or the White House and Fox News.

But in terms of domestic divadom, it’s the best, er, only one going.

However, it appears that the reportedly (and understandably) icy relationship between Stewart and Ray is thawing. On Thursday, Martha appeared on Rachael Ray’s show for the first time.

On Friday, Ray is scheduled to appear on "The Martha Stewart Show."

On Wednesday, Stewart solicited questions for Ray from her Twitter followers.

This comes after Stewart and Ray were photographed together last month at New York City’s Wine and Food Festival.

Perhaps it was the jail time that softened Martha. Or perhaps it’s that big new contract. Whatever the case, at least in terms of ad pages between the pair’s magazines, the rivalry should be hotter than ever – with Ray closing the gap of late.

Through September, Martha Stewart Living is down 29 percent in ad pages to roughly 652, according to the latest ad data released by the Publishers Information Bureau. Everyday With Rachael Ray, with about 462 pages sold, is off 8.8 percent during the first nine months of the year — meaning the split between the two magazines is less than 200 ad pages.

UPDATE: Ray did indeed appear. And guess what? She baked her first pie:

TV host Rachael Ray made her first ever appearance on today’s edition of ‘The Martha Stewart Show’ (check local listings). It was a day of firsts as Rachael joined Martha in the kitchen to bake her first pie. Rachael admitted that a failed attemped to bake her mother a birthday cake 30 years ago left her traumatized, so Martha, who appeared on Rachael’s show yesterday, taught the effervescent daytime star how to bake an apple-blackberry pie perfect for the holidays.

[PHOTO via the Martha Stewart Show ]