No Simon. No Paula. No problem?

Fox isn’t being quite so sunny about Monday’s long-expected, but still shocking, turn of events in the 8-year-old soap opera known as "American Idol." But the official spin from the network: Nobody’s ready to push the panic button over the giant changes looming for the biggest show in TV. 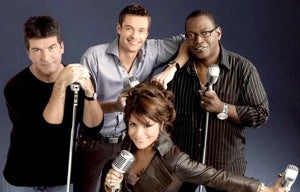 That doesn’t mean everyone involved isn’t seriously nervous about what the next two years hold.

At stake: Nothing less than the fate of Fox’s golden "Idol" — a show that’s added hundreds of millions of dollars to News Corp.’s bottom line while propping up a struggling music industry and creating a steady stream of young pop stars.

Simon Cowell’s decision to depart "Idol" to launch his own take on a talent competition, "The X Factor," means big changes to a franchise Fox insiders would have no doubt preferred stayed stable for as long as possible.

A year from now, the network faces the prospect of wooing viewers back to the 10th season of a show with just one original judge — Randy Jackson — assuming he doesn’t decide to bolt, too. (Ellen DeGeneres is also locked in, but she’s an x factor herself, at least for now.)

And in two years, come January 2012, the 11th season of "Idol" will likely premiere just weeks after the first edition of "X" wraps. If the new show does well, some viewers may decide they don’t want to sit through another four months of musical competition.

Worst-case scenario: "Idol" is damaged by Cowell’s departure, and viewers don’t respond in a big way to "X-Factor."

Fox is left with a weakened, aging hit — and a new clone nobody wants to watch.

But if history is any guide, things might turn out much better for Fox.

"If we’re lucky here, we can achieve something we thought was dead in this country — which is another huge smash hit television show," Fox alternative president Mike Darnell told TheWrap, referring to "X-Factor."

While it’s certainly possible "X" could flop and bring down "Idol," the much more likely outcome is that the network is left with at least one hit music competition series. Its other big competition series, "So You Think You Can Dance," also is doing well.

That could leave one big loser: 19 Entertainment, which co-produces "Idol" but has no stake in "The X-Factor." Cowell said he wants "Idol" to stay strong and remain No. 1 — but that’s just spin.

As "American Idol" historian Richard Rushfield notes in a post on the Daily Beast, Cowell has long hated the fact that he’s "just talent" on "Idol" — even though with an estimated payday in excess of $45 million per year, he’s very well-compensated "help."

When TheWrap asked Cowell Monday whether he really wanted "Idol" to remain on top of the ratings, he dodged the matter, never really answering.

Cowell’s displeasure first surfaced on "Pop Idol," the U.K. predecessor to "Idol." His decision to depart "Idol" to launch "X" in the U.K. several years ago led to a nasty spat between him and "Idol" creator Simon Fuller, since settled. In that case, "Pop Idol" quickly faded sans Cowell, while "X" became a monster hit in its own right.

It’s been clear for years that Cowell eventually planned to mimic his U.K. playbook and leave "Idol" for his own show. He’s been musing openly about his need for change.

The question now is: Will history repeat itself, with "X" capturing the buzz and excitement that until now has belonged to "Idol"? Will there soon be a nation of "X"-philes who simply get their Simon dose on another show?

Cowell’s track record producing shows in the U.S. is mixed. While "America’s Got Talent" is a decent summer success story for NBC, it’s hardly in the same league as "Idol."

Other series he’s produced here, such as the CBS show "Cupid," flopped.

None of these shows have featured Cowell himself, however. He’ll be front and center on "X," making it much more likely his new show will at least get sampled. And if he does land Paula Abdul to sit by his side again, success is even more likely.

There’s no doubt Fox is deeply frightened by the twists and turns yet to come in the "Idol" saga. It’s very possible that today represented the closing chapter in the most iconic series to emerge from the first decade of the 2000s.

But "Idol" has already defied the odds, not just staying on the air but thriving at a monster level of success far longer than anyone could have hoped. After all, by season eight, even megahits such as "ER" and "The Cosby Show" had come down to earth.

Plus, there’s a school of thought that says that, as key as Cowell has been, in the end, what makes "Idol" thrive isn’t the judges or the host.

"The most important element in the show is the kids," Fox scheduling guru Preston Beckman told TheWrap last week, before news of Simon’s departure was announced.

"That’s always been the case. I’m not saying Simon’s not important to the show, or that Ryan’s not important. But when you watch a group of ‘Idol’ fans talking about the show, the most passionate conversations are about the kids. As long as we find six or seven kids who could become the next superstar … then we’ve got what the show is."