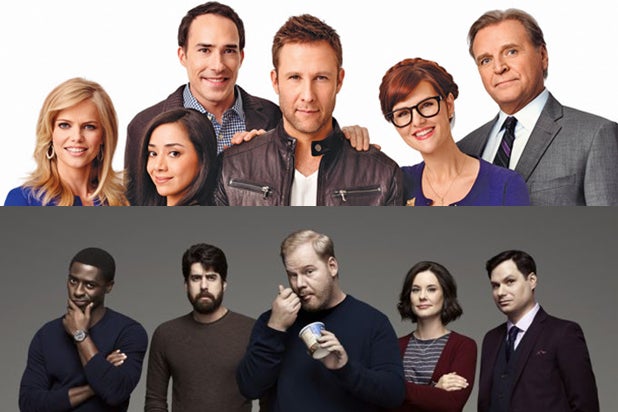 Both “The Jim Gaffigan Show” and “Impastor” have scored Season 2 renewals on TV Land, the network announced Monday.

The two series, starring comedian Jim Gaffigan and Michael Rosenbaum, respectively, air back-to-back on the network Wednesday nights. Both will conclude their debut seasons next month.

“We’re really proud of these shows that represent the new TV Land” said Keith Cox, TV Land’s Executive Vice President, Development and Original Programming. “They have quality writing and great casts, and we’re excited to move on to season two for both.”

“The Jim Gaffigan Show” is a single-camera comedy starring and inspired by Gaffigan’s real life, chronicling his struggle in New York City to find a balance between fatherhood, stand-up comedy and an insatiable appetite.

“Impastor,” from Christopher Vane (“Wings”) stars Rosenbaum as Buddy Dobbs, a slacker on the run from his gambling debt, who poses as a gay pastor of a small, tight-knit town.

Sara Rue, Mircea Monroe, Mike Kosinski and David Rasche also star.Vane and Rosenbaum executive produce, along with Eric and Kim Tannenbaum (“Two and a Half Men”) and Rob Greenberg (“How I Met Your Mother”).