Roger Ebert coined the phrase “idiot plot” to describe movies whose shape depends on their heroes making the dumbest possible choice at every juncture. “Indignation,” James Schamus‘ adaptation of Philip Roth‘s novel, is its Jewish intellectual counterpart: If Marcus (Logan Lerman), a Newark butcher’s son who enrolls in a WASPy Ohio college in the 1950s, set aside his sense of his own moral superiority for even an instant, the whole thing would collapse in a tasteful pile.

Schamus, a longtime executive and screenwriter making his directorial debut, approaches the mid-century American period piece the way he did writing a movie about the Incredible Hulk. “Indignation” is a movie of great thoughtfulness and and rigor, but at times it feels like you’re buckled into Marcus’ straitjacket along with him, and you yearn to loosen the straps.

Marcus arrives at Winesburg College — named in homage to Sherwood Anderson’s “Winesburg, Ohio” — eager to escape his overprotective father, who worries that without an academic deferment, Marcus would become the latest young man from their neighborhood to come home from Korea in a crate.

Making friends, or even meeting girls, is a distant concern: He turns up his nose at his roommates, and rebuffs the genial head of the campus’ Jewish fraternity because he wants to concentrate on his studies. For Marcus, academic achievement is an end in itself, not a means of avoiding the draft or securing his future, and he resents any attempt to divert him from his path. That includes mandatory attendance at Winesburg’s chapel, which offends him less for its attempt at religious indoctrination than as an egregious waste of his time. 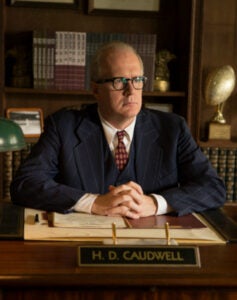 Marcus’ determination not to assimilate to Wineburg’s culture draws the attention of the school’s Dean (Tracy Letts), who calls him into his office for a prolonged confrontation that’s like a Socratic dialogue reset in a wood-paneled study, if Socrates wore tweed and were a casual anti-Semite. To go by his grades, Marcus is a model student, but his determination to hold himself apart infuriates the Dean, and his ardent atheism enrages him. Marcus rages back at him in kind, although his wits are stronger than his stomach.

True to the film’s somewhat chilly style, Lerman never begs the audience to empathize with Marcus, or even to understand him. A more approachable, familiar movie might have taken Olivia’s point of view, that of an emotionally fragile, sporadically suicidal young woman caught in the bind between what men want and what they say they want.

Instead, we’re stuck with prickly, repressed Marcus: It’s like remaking “Far From Heaven” from the perspective of Dennis Quaid‘s character. That’s not an inherently bad idea, but “Indignation’s” repression is lacquered rather than lyrical: Marcus doesn’t suffer romantically like a Terence Davies hero; he digs his own hole, and keeps digging.

Still, the images that bookend the movie, particularly the one that closes it, show that its masculine hardness is thoroughly intentional, and its obdurateness is something to admire, if mainly from a distance.