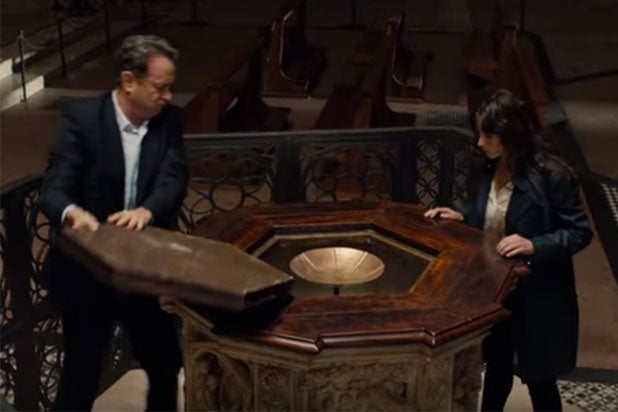 Critics have offered up some highly flammable reviews for “Inferno,” the third movie in the Robert Langdon series.

“Hopefully, ‘Inferno’ marks the end of the Robert Langdon movies,” writes on critic, while another calls it a “plodding thriller.”

One critic added, “‘Inferno’ feels like a bad acid trip.” In total, the film holds a score of 23 percent on Rotten Tomatoes.

Tom Hanks, Felicity Jones and Irrfan Khan star in drama directed by Ron Howard, which follows Robert Langdon using Dante’s The Divine Comedy to prevent a pandemic that would wipe out half of the world’s population.

“‘Inferno’ has very little to recommend, its crushing dullness not even alleviated by laughable silliness,” TheWrap’s Jason Solomons said in his review. “I kept hoping a Wayans brother would pop in and signal it was all one big genre parody, and when you’re fervently wishing for a Wayans, you know you’re in trouble.

“The Da Vinci Code” and “Angels & Demons” were the first two films in the franchise, which collectively have grossed $1.24 billion at the global box office.

See 10 of the worst reviews below.

Jason Solomons, TheWrap
Not scary, not funny, lazily-scripted, bafflingly plotted, devoid of tension and lacking any semblance of character development (not even good ol’ Tom Hanks can do anything interesting with Langdon’s self-absorbed pomposity), “Inferno” is stuck in a cinematic limbo, neither here nor there, not bad enough to be entertaining, but not good enough to admit how terrible it really is. If, as has occasionally been said, film critics reside in the eighth circle of hell, then Ron Howard‘s “Inferno” must be what’s screening in Purgatory.

David Crow, Den of Geek:
“The thing about ‘Inferno’ is that despite its fiery title, there is a general malaise about the whole endeavor. Admittedly, it’s nice to have popcorn for the liberal arts set every bit as watchable and unapologetically dim as the worst superhero broodfests, but one gets the general sense that almost nobody wants to be here, and they’re all eying the Tuscan countryside for a weekend getaway … For the filmmakers, it probably was a lot of fun. But for us, all we got was this lousy movie.”

Matt Goldberg, Collider:
“Hopefully, ‘Inferno’ marks the end of the Robert Langdon movies. They fail as adaptations, they fail as thrillers, they fail as a showcase for Tom Hanks‘ talent, and they fail in just about every other conceivable way with the exception of being an effective advertisement for the place where they’re set. But we don’t need feature length films to tell us that the Vatican and Florence are places worth visiting, and we certainly don’t need more movies featuring a bland protagonist going on bad adventures.”

Brian Truitt, USA Today:
“Even with a wealth of talent involved, ‘Inferno’ is missing some serious heat. Based on the best-selling Dan Brown novel, the mystery thriller is the third film directed by Ron Howard and featuring Tom Hanks as globetrotting symbologist Robert Langdon. Unfortunately, this A-list team still can’t crack the code for a memorable adaptation. Even with a noteworthy supporting cast, intriguing sights and art history on its side, ‘Inferno’ is undone by generic action and a general lack of thrills.”

Jake Cole, Slant Magazine:
“This is material that begs to be made fun of, but it’s impossible to do so given how Howard reduces it to a dull spectacle of earnest puzzle-solving.”

Soren Andersen, Seattle Times:
“Langdon’s amnesia afflicts him with terrible headaches and visions of hellish Dante-derived horrors, full of blood and disfigurement. And guess what? Those headaches are contagious. The amnesia scenes’ blurry imagery and jolt-cut editing may make the viewer wish to lie down in a dark room with a cold cloth on fevered forehead. Somebody, get me an aspirin. Better make that two.”

Josh Bell, Las Vegas Weekly:
“‘Inferno’ is a mostly plodding thriller without a compelling villain (Foster’s evil tech mogul shows up primarily in flashbacks and recorded messages) and or even a compelling protagonist (Langdon has not gotten any more interesting over the course of three movies). The plot twists are both far-fetched and perfunctory, the performances are bland and the frenetic shooting style is ill-suited for the generally staid Howard. Langdon seems pretty content to pore over ancient texts; maybe the movies should finally leave him alone.”

Michael Phillips, Chicago Tribune:
“This is a franchise with lead weights tied around its ankles … I mean, yes, the setups and explanations in a Dan Brown adaptation require all sorts of information disguised as dialogue, in between reminders that there’s a doomsday machine that needs tending to. But Hanks cannot activate the movie because there’s nothing to activate. The character is all function and no form, all strain and distress and no buoyancy. At this point in his career, Hanks is ready and eager for challenges or, at the very least, diversions with a little more spark than this one. It’s too pedestrian to be associated with a circle of hell; ‘Inferno’ is more like a wet match.”

Julian Roman, Movieweb:
“The third time is certainly not the charm for Director Ron Howard and Tom Hanks. ‘Inferno,’ their latest adaptation of author Dan Brown, is an entirely illogical thriller that at no point had my interest. The historical babble and endless chase scenes blur into a two hour postcard for Italian travel. The film aims for a breathtaking pace, but doesn’t give enough time to elaborate on the supposed mystery. Characters bounce around with superhuman intuition, then become foolish to sneak in a few twists. It’s an absurd plot and the worst of the trilogy by far, even if it is burning up the box office overseas.”

Dann Gire, Chicago Daily Herald:
“If you thought Ron Howard‘s first two adventures based on Dan Brown’s best-selling Robert Langdon novels (‘The DaVinci Code’ and ‘Angels & Demons’) came off moderately stagy and cumbersome, ‘Inferno’ feels like a bad acid trip through a globe-trotting James Bond movie, except 007 carries no gun and the resident uber-villain commits suicide during the first act.