Death hung in the air on Friday afternoon at the Staples Center – and the scent of mortality had nothing to do with the terminal condition of this season’s Los Angeles Lakers, who call Staples home, or the impending retirement of their star Kobe Bryant.

No, this aura of death hung over rehearsals for the 58th Grammy Awards, which will take place at Staples on Monday night. At the end of an early-afternoon rehearsal by Alabama Shakes, the quintessentially rock ‘n’ roll visage of the late Lemmy Kilmister loomed over the huge stage as a stand-in read lines that hinted how the late Motorhead frontman would be celebrated on the show.

Immediately after the lunch break, singer Miguel took the stage not to sing one of his own songs but to perform an exquisite, abbreviated version of “She’s Out of My Life,” a tune from the late Michael Jackson.

“This year, in all candor, the story of the show has become what happened” around January, show producer Ken Ehrlich told TheWrap during a break in rehearsal. “Most of the show had already been laid out and booked, and then [multiple musician deaths] hit: Natalie Cole and David Bowie and Glenn Frey and Maurice White …

“There’s no question that the overlay of this really significant number of musical artists that died in an extremely compressed period of time has had a big effect on the show.” This is Ehrlich’s 36th time producing the Grammy show, which has a distinct advantage over other awards shows in that it’s essentially an entertainment show with a few awards thrown in, rather than a series of awards between which the producer tries to sandwich a few bits of entertainment.

Because of that, Ehrlich said he always resisted entreaties to put an in memoriam section on the Grammy show, regardless of how popular those sequences were on other awards shows.

But the Recording Academy finally insisted, and the resulting in memoriam segment ended with a blistering live performance of the late Joe Stummer’s Clash song “London Calling” by Bruce Springsteen, Elvis Costello, Dave Grohl and others, making the act a true Grammy highlight. Since then, Ehrlich admitted, the sequences have been organic pieces that fit on the Grammy show. 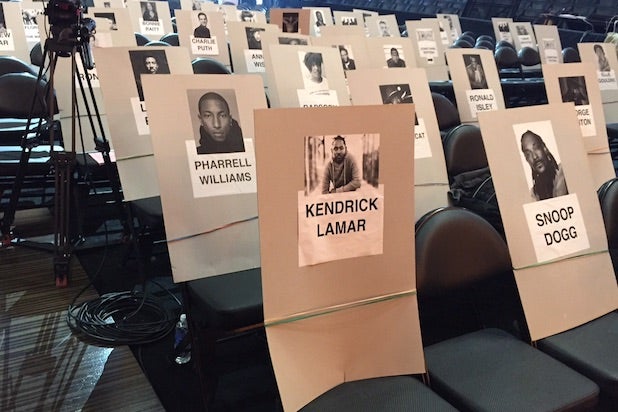 So this year, it was a no-brainer to immediately plan a Bowie tribute, to quickly pair the surviving Eagles with Jackson Browne, to add other tributes to a show that will also include performances by Taylor Swift, Rihanna, Adele, the Weeknd and many others.

“Now, you can say, ‘Why aren’t you doing a full number for Paul Kanter?'” Ehrlich said of the Jefferson Airplane co-founder who recently died. “Well, the show can’t just be ‘Grammy salutes people who passed away in 2016.’ The Grammys have always found that line between looking back, looking at the best of today and occasionally looking to tomorrow.”

A few minutes later, today and perhaps tomorrow arrived at Staples in the person of Justin Bieber, whose arrival was presaged by an influx of visitors, a heightening tension and a crew member announcing, “It’s Bieber time!”

Thin as a rail and walking fast, Bieber emerged from backstage sporting a green knit cap, a black Metallica “Fear of God” T-shirt and faded jeans with matching holes in each knee and additional matching holes in mid-thigh. He said hello to veteran Grammy stage manager Garry Hood, then hugged Ehrlich and pointed at the producer’s Hawaiian shirt, which was covered with accordions.

“I like that shirt,” Bieber said, offering Ehrlich a high five.

While Hood asked everyone in Staples to keep their cellphones in their pockets and not take photos or videos, Bieber strummed an acoustic guitar and walked in circles on a small round stage some 10 rows deep in the orchestra section. But when he approached the microphone, a blast of harsh and deafening feedback ripped through the huge arena.

“That’s gonna leave a mark,” said Hood, who then frowned and pointed to the in-ear monitors that Bieber was wearing. “Is that in your ears?” he asked.

“Good,” said Hood. “Better take them out just to be sure.”

The shrieking feedback rattled the room a couple more times before the sound crew finally fixed it and Bieber was able to make his way through an acoustic version of his breakup ballad “Love Yourself.” Then he ran to the stage and joined Jack Ü (Diplo and Skrillex) in the hit “Where Are Ü Now,” ending the song with a bouncy dance across the stage that he only had to interrupt once to make sure his pants wouldn’t fall down. 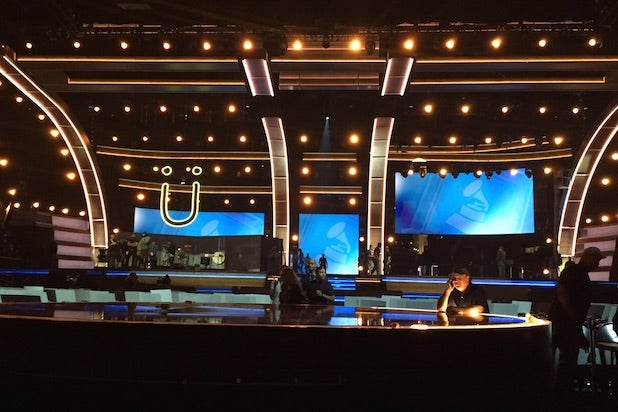 Before the second run-through, Bieber practiced a few lines of “Love Yourself” by himself. But he inserted a significant lyric change: in place of the original line “If you think that I’m still holdin’ on to something/You should go and love yourself,” he grinned and sang ” … you should go and f— yourself.”

“I like that version better!” shouted one bystander, as Bieber grinned.

After the third take, the Grammy crew began to reset the stage for a Lionel Richie number that would also include performances by John Legend, Demi Lovato, Luke Bryan and Meghan Trainor. Meanwhile, a large group of teen and pre-teen girls materialized on the floor of Staples, most of them with autograph books in hand.

The aura of death may have hung in the air for some of us, but it had been thoroughly banished for as long as Bieber was in the house.