After 45 years on the air — first on ABC before moving to ESPN in 2006 — “Monday Night Football” continues to be a ratings juggernaut.

The final game of the NFL week has won the night on all 13 Mondays this season among all key male and adult demos so far — proving that Monday really is football night in America.

The matchup on Nov. 23 between the Super Bowl Champion New England Patriots and the Buffalo Bills averaged an 8.9 U.S. household rating and 14,256,000 viewers, according to Nielsen, while last week’s Dallas Cowboys-Washington Redskins game scored a 10.0 overnight rating. 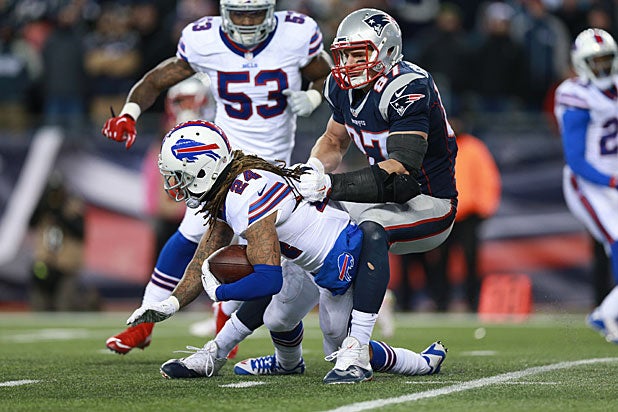 “The stage is just enormous — with the energy surrounding and its iconic stature, feels like you are doing the Super Bowl every week,” sideline reporter Lisa Salters added.

Whether fans love him or hate him, NFL game analyst Jon Gruden is a top Twitter trend each week and boasts the honor of also being a Super Bowl-winning coach (with the Tampa Bay Buccaneers, in 2003).

“‘MNF’ has always had a celebrity in the booth; Jon has a rock star quality,” Tirico explained. “There is an unbelievable charisma and credibility to him, and as a fan you want to hear what he says about your team or your city.”

TheWrap recently hitched a ride on the “Monday Night Football” bus, check out five revelations from the road trip that you don’t see on TV. 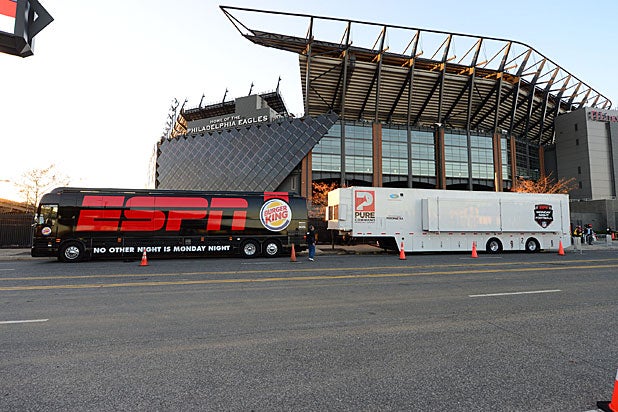 With 300 people traveling to 16 cities each season, Tirico compares “Monday Night Football” to an old-fashioned circus. “We go to the next city, the truck unfurls and the tent opens. After 72 hours in town we pack up and do it all over again,” he said.

“This becomes our family as we are with each other half the week, from early Saturday to Tuesday morning,” he explained. “We have a core team that has worked together for 25 years. It is really like one big holiday party — we all bring a dish to the table and then serve it to the fans.”

Even the “Monday Night Football” bus (which travels 23,065 total miles during the 2015 season) turns into a mini-studio. “Every week on the pregame show we get a player on the bus. We have a working monitor so we rig the lights and do a three-camera interview back there,” Tirico explained. 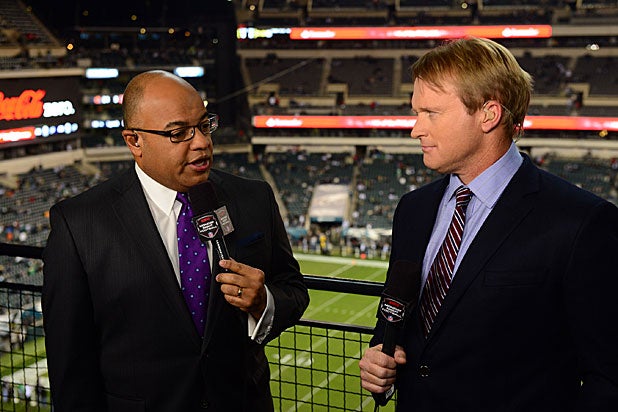 What appears spontaneous is actually calculated

“The joy of this job is similar to being in New York’s Grand Central Station at rush hour,” New York native Tirico said. “We have so much information, video sources and people in production who bring so much to the table. Our responsibility is to make sure the right message gets across. Is it the time to be funny with Jon, is this just about the football or is there an important story to tell? That’s the part of the job I love.”

While many fans use football to escape their troubles, sometimes it helps heal real-life horrors such as the first New Orleans Saints home game after Hurricane Katrina in 2006 against the Atlanta Falcons. “Many dignitaries and first responders were there, U2 performed,” Tirico recalled. “I’ll always remember that game because 55 weeks earlier, the stadium was a place of last resort where people were trying to stay alive …  then it was transformed into a place of celebration and the first sign to the world that New Orleans was open to business again.

“When the Saints won after a dramatic start to the game, that was the loudest stadium I’ve ever been in and nothing has come close since. It changed a lot of my perspective about what we do,” he said. “That night convinced me that sports do have a real place in the world as it represented New Orleans in a way nothing else could.”

That observation is especially profound in this age of terrorism and shooting rampages, in which we continue to be divided by race and religion but united by sports. “If you give me any section in the stadium tonight you will find multiple religions, genders, races, ages all cheering for the same thing,” the sportscaster said. I challenge you to find a song, movie, play or book that can do that,” he added. 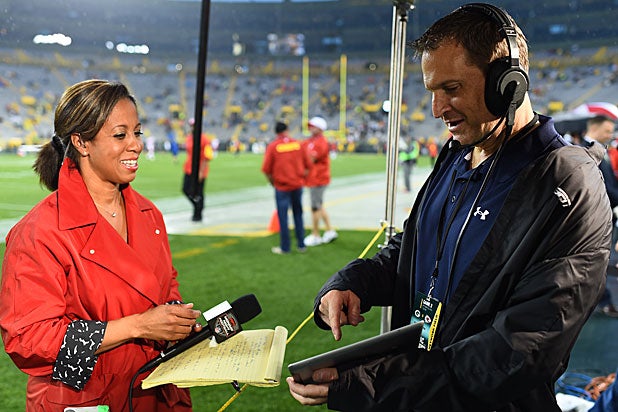 Whatever the weather, must go on

They call it “football weather” for a reason, as games are played in wind, snow — and occasionally sweltering heat. Salters has to dress accordingly and still do her job on the sidelines, and usually turns to her favorite designer, Max Mara. “If it wasn’t for them I would be a basket case because fashion is not my strong point,” she said. “We start in April and go through the whole season and see where it’s going to be and then pick a wardrobe for each game.

“I get excited that I am able to wear these gorgeous — and warm — coats. When you feel like a million bucks then it makes you feel better about your work. It’s a lot of preparing yourself against the elements,” she said. That preparation is aided by stylist Cynthia Carr Gardener, who gives Salters essential advice such as: Cashmere reads beautifully on camera as the fabrics reflect the light, but wool doesn’t. “The real key for sports journalists or news reporters is that all the interest is directed to their face, so we pick beautiful fabrics and textures but nothing wildly printed or too distracting,” she explained.

Salters said she takes Wednesdays off, then it’s back to work Thursday for conference calls. “Friday we travel, Saturday we meet with the home team, Sunday the away team and Monday ,” she told TheWrap. “I always say that ‘MNF’ is like a runaway freight Just like the athletes, if you have a bad game then you can’t dwell on it — you have to move on to the next one. The train is going to stay moving so you can’t stop and think.”