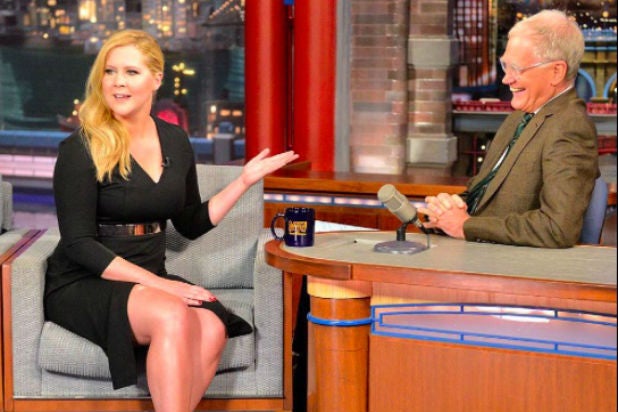 Amy Schumer announced on Monday that her Comedy Central show “Inside Amy Schumer” has been picked up for a fourth season.

The comedian shared the good news on “The Late Show With David Letterman.”

“I just found out before I came out — we’ve got a fourth season,” Schumer told the veteran late-night host, prompting congratulations from him and a round of applause from the audience.

When asked if the show gets easier as she goes along, she replied: “I find that I am getting easier … I mean sexually, Dave.” Leading the embarrassed host to ask if she is engaged or dating anyone. “My status is I’m totally single,” she said, claiming she had been dating an infectious disease doctor but he was a secret alcoholic. “That’s my thing.”

Fresh off hosting the MTV Movie Awards, Schumer later told Letterman that she can’t be trusted around celebrities and had stalked Bradley Cooper backstage.

“Thank you Dave and @Brianteta and everyone on the @Letterman crew. I am so honored I got to be on the show so many times before the end!” Schumer tweeted after the episode aired.

Thank you Dave and @Brianteta and everyone on the @Letterman crew. I am so honored I got to be on the show so many times before the end! xox

The outspoken comedian began her career on NBC’s “Last Comic Standing,” where she placed fourth, and “Inside Amy Schumer” first aired on April 30, 2013. Season 3 premieres on Tuesday on Comedy Central at 10.30 p.m.

Also Read: Amy Schumer Will Give Ansel Elgort an MTV Movie Award -- for a Price (Video)

The Peabody Award-winning and Emmy-nominated “Inside Amy Schumer” explores topics revolving around sex and relationships and is made up of scripted vignettes, stand-up comedy and man-on-the-street interviews.

The series was created by Schumer and Daniel Powell, who executive produce along with Head Writer Jessi Klein. Tony Hernandez and Steve Ast also serve as executive producers, Kim Caramele and Kevin Kane as producers.

“Inside Amy Schumer” returns to Comedy Central with new episodes on Tuesday at 10.30 p.m.

Chelsea Handler
Handler may be leaving "Chelsea Lately" when her contract at E! expires. She could be the first woman since Joan Rivers to host a late-night show on a broadcast network.
View In Gallery