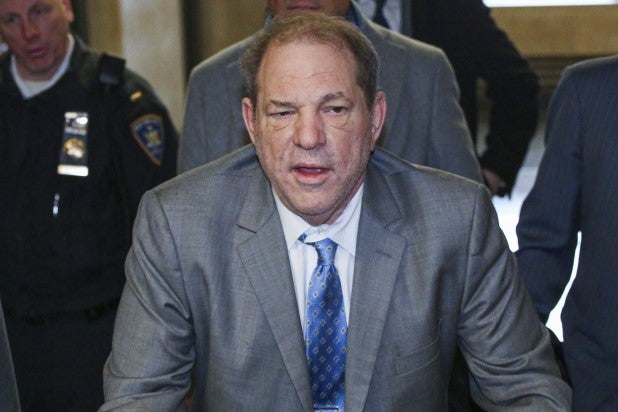 Harvey Weinstein’s criminal trial is now in the hands of the jury, which just completed its first day of deliberations without reaching a verdict. The panel of seven men and five women have an arduous task ahead of them: determining whether the disgraced mogul is guilty, or not guilty, of the charges against him.

But, though Weinstein faces a total of five felony counts, the jury was instructed that they won’t be able to convict the mogul on all five. To understand why, we need to look closely at each of the charges, and how they link to the testimonies of three women: Miriam Haley, Jessica Mann, and Annabella Sciorra.

Haley, a former production assistant on the Weinstein-produced show “Project Runway,” testified that in 2006, Weinstein held her down on a bed in his SoHo apartment, pulled out her tampon, and orally sexually assaulted her. Mann, a former aspiring actress and hairdresser, testified that Weinstein ordered her to undress and raped her in a New York hotel in 2013. Sciorra testified that around 1993, Weinstein barged into her apartment in Gramercy Park, raped her, and then performed oral sex on her without her consent.

Weinstein is not formally being charged for Sciorra’s account because it falls outside the statute of limitations, but her testimony is still being used to help fulfill the requirements for the predatory sexual assault charge, which requires that a person can be found guilty of this charge if they commit rape or a forcible criminal sexual act against at least two people.

Here are the charges the jury is now deliberating.

1. Predatory sexual assault (as pertaining to the testimonies of Miriam Haley and Annabella Sciorra)

3. Predatory sexual assault (as pertaining to the testimonies of Jessica Mann and Sciorra)

4. Rape in the first-degree (Mann)

5. Rape in the third-degree (Mann)

First-degree rape occurs, under the law, when a person compels another person to have sex through physical force or through a threat — expressed or implied — that they, or someone else they know, will be in danger if they do not comply.

In that case however, the jury may continue to consider the second charge, criminal sexual act in the first degree, which is tied to Haley’s testimony.

Also Read: Harvey Weinstein's Criminal Trial Heads to the Jury - But Has the Prosecution Made Its Case?

If the jury finds Weinstein guilty of count three, predatory sexual assault (pertaining to Mann and Sciorra), then the jurors must disregard counts four and five, which are the two rape charges connected to Mann’s account. But if the jury finds Weinstein not guilty of the Mann/Sciorra predatory sexual assault charge specifically because the jurors could not believe beyond a reasonable doubt that Weinstein committed first-degree rape against Mann in a New York hotel in 2013, then the jury must also find Weinstein not guilty of count four, rape in the first-degree. If this is the case, the jury will be instructed to move on to the fifth charge, rape in the third-degree.

In the first few hours of deliberations, the jury has already raised several questions about this intricate task, requesting further clarification on the legal definitions of each charge and how they might consider each charge. Around 3 p.m. on Tuesday, the jury also requested to review two pieces of evidence: a blueprint of Weinstein’s SoHo apartment and emails with a “red flag list,” which featured Sciorra’s name highlighted in red, that Weinstein had sent to an investigator.

Weinstein has pleaded not guilty to these charges and denied accusations of nonconsensual sex.

The verdict sheet can be seen below: