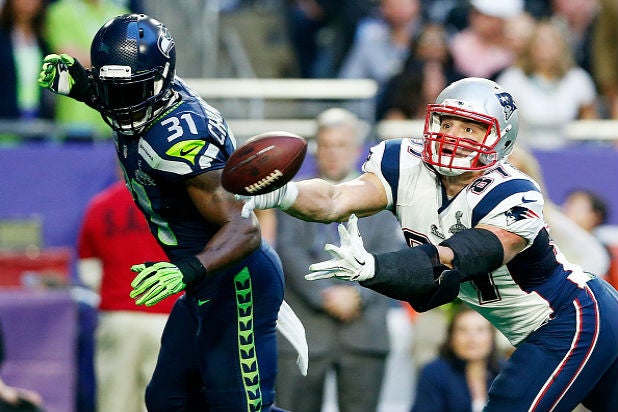 The media frenzy around Super Bowl XLIX began long before the first play between the New England Patriots and the Seattle Seahawks in Glendale, Arizona, on Sunday.

All across the host city of Phoenix, Hollywood stars and loyal fans who had traveled from across the country joined together for a week of celebrations, and TheWrap was in town to capture the action.

While an estimated 120 million viewers tuned in for the big game, expensive commercials and Katy Perry’s halftime show, here are the things you didn’t see during the broadcast.

1. Chris Pratt amps up his fellow fans.
“Guardians of the Galaxy” star and diehard Seattle Seahawks fan Chris Pratt had a celebration of his own before the game inside the outer ring of the stadium. Hundreds of fans, including opposing Patriots followers, cheered him on as he rallied the crowd and took selfies. Twitter rival Chris Evans (who’s from Boston) was not there joining in the rambunctious mayhem!

2. Teams warm up in advance.
Over an hour before kickoff, both teams took to the field to warm up, giving fans smart enough to get there early a free pre-show. Tom Brady was spotted throwing passes to backup quarterback Jimmy Garappolo, while even gigantic Patriots tight end Rob Gronkowski powered through tackle drills. Just before they cleared the field, every player dropped down into lunges to stretch before their grueling three-hour plus workout.

3. John Legend silences the fans …
John Legend calmed the rowdy crowd with his chilling rendition of “America the Beautiful,” which had the stadium silenced into a stunned awe as he hit every note. Next up for Legend is the Oscars on Feb. 22, where he shares a nomination with Common for “Glory” from “Selma.”

4. … And so does Idina Menzel.
No one was going to get Idina Menzel’s name wrong on Sunday. The singer from Long Island has performed the “The Star Spangled Banner” for her hometown New York Giants, and Seattle and New England fans were just as impressed as they cheered respectfully during her moving performance.

5. Seattle fans really are loud.
Seahawks fans are known for having the loudest stadium in the league – having even caused mini-earthquakes at CenturyLink field! They proved to be just as loud on the road as their cries echoed through the retractable roof in Phoenix. Even the coin toss, which came up tails, sparked an explosion of noise.

6. Commercial-free zone.
As viewers at home and Super Bowl parties around America watched the most expensive commercial spots of the year, fans in the stadium saw game replays, spots from corporate sponsors and listened to cheesy pop or rock tracks during timeouts and ad breaks, while a few lucky ones got their own faces on the jumbotron in the end zone during impromptu crowd shots.

7. The stage is suddenly set.
The lights dim at halftime — but fortunately not as much as in 2013 when they blacked out completely in New Orleans — so the stage could be set for Katy Perry’s elaborate performance. It took around seven minutes for the football field to be transformed into a glimmering stage as hundreds of workers moved in flowing unison. A circle taking up half the field with the Pepsi logo soon emerged as performers ran out carrying giant purple balls and silver clad dancers took their places.

8. Katy Perry heats up the stadium.
After a majestic entrance on a golden lion while making the crowd “Roar,” Perry’s tropical performance — which included dancing sharks, swaying palm trees and bouncing beach balls — literally warmed the crowd up as the heat from the flames reached even to the upper decks of the stadium. As she levitated above the stage, the sky about the stadium exploded with fireworks, lighting up the post-sunset sky. Then, as quickly as it was set up, the whole extravaganza was broken down once again so the game could resume.

9. Famous fan bonding.
Chris Evans eventually did catch up with his Twitter nemesis when he bumped into Chris Pratt and Anna Farris with two minutes to go in the third quarter. “Captain America” surprised the couple and pulled them in for a friendly hug, which was captured on the jumbotron for the entertainment of the tense crowd. Ice Cube also got caught on camera and flashed a wave to the fans.