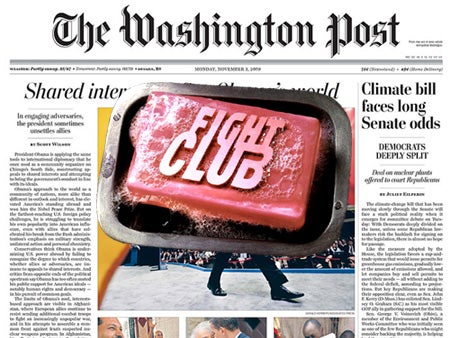 Just how tense is it to work at a newspaper these days? Very. Even for those in the Style section.

According to reports out of D.C., a fistfight broke out on Friday at the Washington Post. The fracas reportedly involved 70-year-old Pulitzer Prize-winning feature editor Henry Allen and style writer Manuel Roig-Franzia, with executive editor Marcus Brauchli breaking up the brawl.

Further details, including what precipitated the fight, are hard to come by. We all know the first rule of Fight Club – and the Post’s somehat Draconian rules on tweeting.

But, by at least two accounts, it stemmed from Allen’s harsh comments about a story turned in by another style section writer. Via the Washingtonian:

Allen, according to sources, said: “This is total crap. It’s the second worst story I have seen in Style in 43 years.”
Roig-Franzia then wandered into the newsroom. A veteran foreign correspondent, he has been turning out political features for Style. He heard Allen’s rant and stopped by his desk.

Allen lunged at Roig-Franzia, threw him to the newsroom floor, and started throwing punches. Roig-Franzia tried to fend him off. Brauchli and others pulled the two apart.

“We take this incident seriously and will address it appropriately,” Brauchli told Politico.com.

Allen later told Politico he was surprised by the huge reaction in the media world.

"Back when I got into journalism, the idea that a fistfight in a newsroom would turn into a news story was unthinkable," Allen said on Monday evening. "The guys in the sports department at the New York Daily News, they had so many, you wouldn’t even look up."

Allen isn’t expected to work out of the newsroom for the remainder of his time at the Post, Politico said.