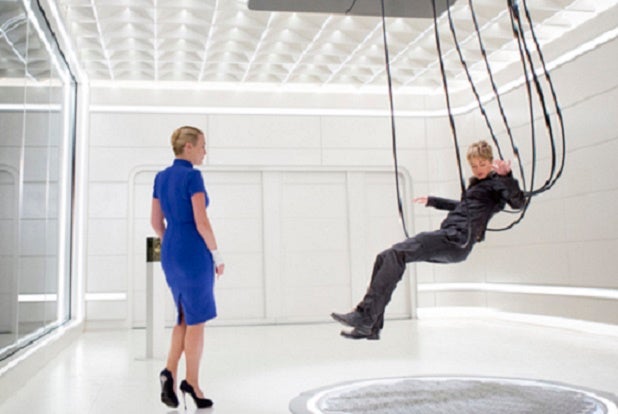 “The Divergent Series: Insurgent” delivered at the box office this weekend, bringing in an estimated $54 million and pushing “Cinderella” out of the top spot.

The sci-fi action sequel “Insurgent,” with young stars Shailene Woodley, Ansel Elgort and Miles Teller easily topped the weekend’s other wide openers, and matched the $54 million opening of “Divergent” on this same weekend last year. And it held off Disney’s “Cinderella,” which took second with a strong $35 million.

“The Gunman,” an R-rated thriller starring Sean Penn, misfired in its debut for Open Road Films with roughly $5 million and was third. And the Christian drama “Do You Believe?” failed to fire up the faithful to the extent that other religious films have and managed just $4 million for sixth. With all three new films coming in at the low end or under expectations, the overall box office was off roughly 10 percent from the same frame last year.

Even in triumph, “Insurgent” offered an example of how tricky the terrain has become for young adult literary adaptations. Lionsgate and its Summit Entertainment division, which were behind the blockbuster “Twilight” and “Hunger Games” movies, know how to turn teen bestsellers into box office as well as any Hollywood studio. But finding a replacement for those franchises hasn’t been easy, though Lionsgate has done better than the rest of Hollywood.

Among the YA projects that have fizzled in the past two years are the female-angled films “The Giver,” “The Host,” “Beautiful Creatures,” “Mortal Instruments: City of Bones” and “Vampire Academy.” Fox connected last year with “Maze Runner,” which skews more male.

“When you see the kind of box office consistency that ‘Divergent’ and ‘Insurgent’ have enjoyed exactly one year apart, it seems that at least this brand is as solid as ever. In addition, the second installment of ‘Hunger Games: Mockingjay” will likely prove to be a winner as well,” he said.

For whatever reason, the U.S. marketplace has become tougher to crack for young adult films. That means overseas audiences have become critical for movies like ‘Insurgent,’ which some analysts thought would hit $60 million in its domestic debut.

It looked solid overseas, opening at No. 1 in 66 of the 76 foreign markets in which it rolled out and took in $47 million. That’s good news for Lionsgate because with its $110 million production budget,  “Insurgent” cost $25 million more to make than “Divergent.”

“Overseas audiences seem to respond strongly to the action elements that are at the core of many of these YA sci-fi or adventure films and let’s face it, there are young adults all over the world who can identify with these characters,” said Dergarabedian.

“Insurgent” hit its demo targets, which were the readers of the Veronica Roth novel that it’s based on and young women. The audience was 60 percent female and 55 percent under the age of 25. Hispanics made up 17 percent of the crowd, African-Americans 11 percent. They gave “Insurgent” an “A-“ CinemaScore, which is much better than the critics who have it at 38 percent positive on Rotten Tomatoes. That should help the Robert Schwentke-directed sci-fi saga with spring break about to begin at colleges and schools.

The key for the young adult genre may be redefining and expanding it, Dergarabedian said.

“Young adult films can take many forms including the romantic drama, as with ‘The Fault in Our Stars’ (in which Woodley and Elgort starred) and perhaps even the upcoming Nicolas Sparks rodeo romance ‘The Longest Ride’ may tap into that audience,” he said.

The 365 Premium Large Format screens brought in $4.4 million for “Insurgent,” and 356 IMAX theaters delivered $3.6 million, including eighty of the 10 top-grossing sites.

The opening for “The Gunman,” which is directed by Pierre Morel (“Taken”) and co-stars Idris Elba, Ray Winstone and , puts it in the middle of the pack in terms of this year’s box-office bombs.

“The Gunman” played older and male, drawing an audience that was a whopping 91 percent over the age of 25 and 58 percent men.

Pure Flix Entertainment’s “Do You Believe?” couldn’t duplicate the success of the company’s “God’s Not Dead,” which broke out with a $9.2 million opening from just 780 theaters on this same weekend last year. “Do You Believe?” was in considerably more locations, playing in 1,295 theaters.

Disney’s live-action “Cinderella” fell off just 49 percent from its opening last week, the sixth-best ever in March. With its foreign haul included, the Kenneth Branagh-directed fairy tale took in $75 million this weekend and has topped the $250 million globally.

“Run All Night,” the Liam Neeson thriller, took in $4.8 million in its second week to finish fourth and Warner Bros. “Kingman: The Secret Service” added $4.6 million for fifth place.