A new Forrester Research study on U.S. interactive marketing suggests a rapidly changing reality that may help spell the end of traditional media: marketing dollars are migrating to the Web.

Here’s the thrust, from the study’s summary:

"Interactive marketing will near $55 billion and represent 21% of all marketing spend in 2014 as marketers shift dollars away from traditional media and toward search marketing, display advertising, email marketing, social media, and mobile marketing."

It adds: "The cannibalization of traditional media will bring about a decline in overall advertising budgets, death to obsolete agencies and a publisher awakening." 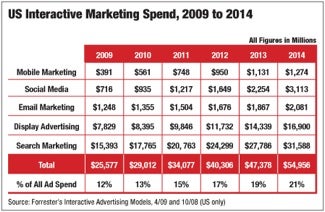 With that in mind, it’s no surprise studios are trying to monetize the shift, especially when it comes to huge films and programming like "Harry Potter and the Half-Blood Prince."

The study’s findings suggest that the sluggish economy has contributed to this movement, as marketers faced with budget cuts find interactive options to be less expensive and more measureable.

It concludes that advertising budgets will decline, although marketing will not. the Forrester team points out that marketers are not likely to surrender their budgets; it suggests, rather, that the extra marketing dollars would be invested in areas such as research, customer service or market-specific technology.

That shift presents a grim outlook for traditional media, as more than half of those surveyed suggested that to pay for interactive marketing, they intend to shift budget from other areas, most notably direct mail, newspapers and magazines.