The new interim head of Motion Picture and Television Fund acknowledged to TheWrap Thursday that his organization had made a huge mess of trying to close its long-term-care nursing home.

“We f—ed up,” interim CEO Bob Beitcher said bluntly in an exclusive interview with TheWrap.

He added that he and the Fund’s board intended to spend the next several weeks reconfiguring their mission — including the future of end-of-life care.

That, he said, would have to happen before they could even attempt to hire a permanent new chief executive.

Meanwhile, an examination of the fund’s 2008 tax return revealed that David Tillman, the CEO  who was forced to resign on Tuesday, received yet another pay raise as the hospital sank into apparent insolvency. His pay package rose to an astounding $932,000 in 2008, according to the return. (Below: The MPTF’s 2008 Tax Form; see the whole document.)

Beitcher, a former president of Panavision with just two years’ service on the MPTF board, was staggeringly frank in his willingness to acknowledge more than a year’s worth of poor decision-making, and even poorer communication, with the Woodland Hills retirement community’s residents, their families and the media.

“Clearly, we just sprang it on everyone. We can now look back and say we f—ed up,” he said. We communicated it incredibly poorly, and it just made people crazy. We still haven’t been able to clarify it.”

Beitcher’s whole tone could not have been more different from the secretive, defensive, spin-heavy approach taken under the leadership of his predecessor, Dr. David Tillman, He was willing to listen to any question and provide detailed answers. (See accompnanying story: "With Tillman Gone, Eyes Move to Ellis.)

Discussed were subjects including reasons for the closure; possible long-term care solutions; Tillman’s compensation, as highlighted in the MPTF’s 2008 tax returns; fundraising; and the Fund’s past mistakes. 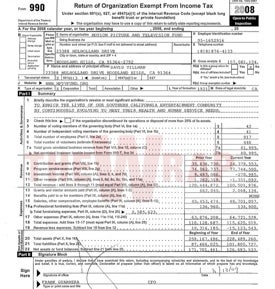 He told TheWrap he’d “love” to have a dialogue with members of the activist group Saving the Lives of Our Own, which has fought tooth and nail against the nursing home closure — just as long as it was a real dialogue and not a shouting match.

And he spent his first full day on the job talking to members of the retirement community about options for longterm care.

Beitcher made no effort to defend Tillman, but he also made clear that the decision to close the nursing home was one shared by the entire board, which approved it unanimously, and that the poor handling of the consequences of that decision constituted a collective failure.

He characterized the current state of the MPTF as “a mess” and added: “One of the reasons that I’m here is that I’m familiar with the mess. I’m one 44th of the people who were the cause of the mess.”

Beitcher did not apologize for the closure decision itself. He said the nursing home was creating annual losses of $10 million — something confirmed by the MPTF’s latest tax returns — and was simply not a viable concern given the age of the building, the cost of providing long-term care and the difficulty the MPTF has had over the past several years in filling its 170 beds.

He appeared to distance himself quite considerably, however, from the assessment made by Tillman and others that the MPTF should get out of the longterm care business altogether and simply order the surviving residents of the facility to leave.

“I’m still looking at other solutions,” he said. “I doubt it will include keeping that physical plant open, just because that requires huge amounts of capital.”

Beitcher said, however, that he was very interested in providing members of the retirement community with a clear idea of where they would end up when they got to the stage of needing longterm nursing care.

One option was responding to what he said was a growing demand for nursing facilities at home. Another — the one most notably championed by Tillman — was putting them in touch with other nearby nursing homes like the Los Angeles Jewish Home for the Aging and ultimately consigning them to the care of outside operators.

Beitcher would not be drawn on what “other solutions” might constitute. When asked, however, if it might be possible to induce an outside operator to build a new nursing care facility on the Woodland Hills campus and mix MPTF patients with others, he did not reject the proposal.

He also emphasized that it would be better to have a long-term care facility within easy reach of the retirement community, so friends or married couples could continue to be in close touch if one of them had to go into longterm care before the other.

He made no promises whether this was actually a viable reality.

Among the many issues he addressed:

Executive compensation. The MPTF’s 2008 tax return shows yet another pay rise for Tillman — around $615,000, compared with $597,000 in 2007. Including pension contributions from the MPTF, and taking into account changes in the Internal Revenue Service’s reporting rules that create a certain bubble effect, his compensation shot up from about $750,000 in 2007 to a staggering $932,000 in 2008.

Beitcher said Tillman’s performance-related bonuses were determined, at the time, by a mechanical calculation determined by his contract. Since 2009, when he signed a new contract, his pay and bonuses had become entirely discretionary. Asked whether that meant he received no bonuses for 2009, Beitcher would not comment because the full accounting figures were not yet in.

Fundraising. Beitcher said fundraising for this year was roughly in line with past years and did not appear to have been affected by the controversy over the nursing home — a testament, perhaps, to MPTF fundraising chief Jeffrey Katzenberg’s ability to twist arms in Hollywood.

Beitcher also explained why the Fund had made no specific request for help to keep the nursing home open. As he saw it, the overall figure would probably end up the same, and the MPTF did not want any mandates or earmarks directing some portion of that to the nursing home when it had determined the home was no longer financial viable — it preferred to keep its spending options open.

Past mistakes. Beitcher would not be drawn into a critique of Tillman’s tenure. He did not deny, however, that it might have been smart to plan a new nursing home facility 10 years ago — something the Jewish Home for the Aging did and eventually followed through on.

He mounted no defense of Tillman when asked about widespread complaints about his management style and his choice of cost-cutting measures — many of them over the objections of his senior staff. And he suggested the MPTF — for reasons of historical pride and sense of mission — might have been too unwilling to consider allowing non-industry patients into its nursing home to make up the numbers.

Tillman extended eligibility to the parents of entertainment industry workers, but that was not enough to fill all 170 beds.

Beitcher said Tillman would keep rights to his full pension, although payment into the scheme stopped the day he resigned.

Asked whether Tillman would receive any exit package, Beitcher refused to comment. He further refused to say whether discussions on the topic had taken place or were scheduled to take place.

He did say, however, that the MPTF would reassess its entire mission and what it wants to achieve over the next five years. “That’ll be a couple of months process, and then we’ll go out and do a search for a new chief executive,” Beitcher said.

He acknowledged the organization was in too much of a shambles to initiate a search now. “We need a new mission statement,” he said. “Anyone who was going to be up for this job would disqualify himself or herself if we didn’t have that. Otherwise they would be walking into a mess.”