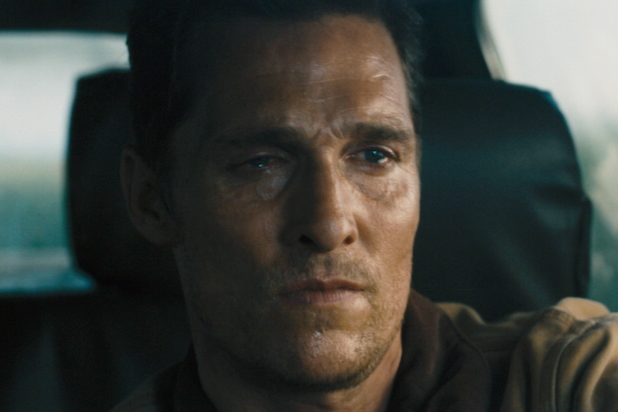 Christopher Nolan was tightlipped about “Interstellar,” his closely-guarded new cinematic spectacular. But he did reveal during an onstage interview at CinemaCon on Wednesday that the film deals with wormhole travel.

He downplayed suggestions that the film might have a time travel element, and said that “Interstellar” is about using celestial shortcuts to reach parts of space that might otherwise be inaccessible. Producer Kip Thorne, a noted theoretical physicist, has been consulting on the science behind wormholes.

“It’s something that really looks at who we are as people,” Nolan teased.

He went on to say that “Interstellar” harkens back to the “golden age of blockbusters,” a time of “Star Wars” and “Indiana Jones” and one in which the phrase “family film” did not have “pejorative connotations,” he argued.

It’s also a throwback in another key way. Instead of relying exclusively on computer imagery, Nolan had his production crew design and build spaceship sets.

It meant that his design team had to prepare their futuristic visions ahead of time, but it “paid huge dividends for the actors.”

“Interstellar” will be shot largely in IMAX and boasts a cast that includes Matthew McConaughey, Michael Caine, Jessica Chastain and Anne Hathaway.

The director would not reveal McConaughey’s role in the film, beyond saying he acts as a surrogate for the audience.

“I needed somebody who was very much an everyman… somebody really relatable,” he said.

Nolan seemed as pleasantly surprised by the newly minted Oscar winner’s recent run of critical successes. He knew McConaughey primarily from his star turns in commercial fare, but felt the jolt of rediscovery after screening a rough cut of “Mud.”

“It was a transformational performance,” Nolan said.