I’m a media executive and a film producer (“Revenge of the Nerds,” “Arlington Road,” 25 others). What does that mean? Well amongst other things it means you get really good at taking an idea and then assembling the team and the financing that gives it birth. So that skillset is mine. I own it.

I had to do something about the lady living in a refrigerator box near where I sleep in a house with a refrigerator: I got the Sub-Zero. She got the box. The situation seemed to deny the value of my civilization. It bothered me a lot. So I invented EDAR, because Everyone Deserves a Roof. 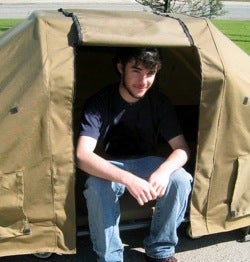 I began counting the homeless people on my bicycle route from Westwood to the beach in Santa Monica and return. There were 62 homeless people on those streets, including many women and several children. I interviewed all 62 of them and then conceptualized EDAR as a mobile single-person device that would facilitate recycling (a principal source of income for many who are homeless) by day and at night convert into a dry, safe tent-like enclosure for sleeping, raised off the concrete, with privacy and storage space.

Then I sponsored an EDAR design competition at the Pasadena Art Center College of Design. As a result, I met designers Eric Lindeman and Jason Zasa and we have been working on this together ever since. Wire design and fabrication have been provided by John Ondrasic and Mike Orozco of Precision Wire Inc., the biggest (and certainly the most generous) shopping cart manufacturer West of the Mississippi. Jeff Skoll of Participant Media stumped up the first capital.

EDARs cost $500 and are given free of charge to homeless individuals who are best able to benefit from their recycling and shelter capabilities. We mostly work through partnerships with shelters, churches and other service organizations.

Each EDAR provides shelter to the homeless person in an innovative cost- and usage-effective way. The EDAR unit is a purpose-specific, special four-wheeled enclosed device, very roughly reminding one of a covered shopping cart. There are 3 million Americans without homes now. 1.5 million of them are children. EDAR is better than what they’ve got, even though it is not as good as that bed in a shelter or in an apartment — because there are five people homeless for every bed available. 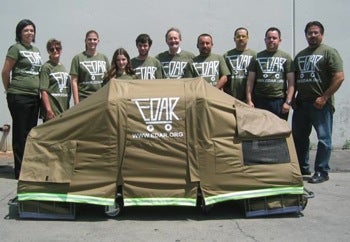 During the day, the EDAR unit is used to pursue the necessities of life. Personal belongings are secured by the use of locks. The front and back of the cart have storage baskets with removable canvas pouches. The unit is waterproof and provides protection for what it contains. EDAR’s wheels are better than a supermarket cart’s, being slightly larger and easier to steer in a consistent fashion. There are two brake and locking mechanisms which ensure the unit will not move on its own.

At night, the EDAR unit easily hinges out and down to Night Mode in less than 30 seconds, becoming a sleeping unit. Unfolding the unit allows it to lock in place as the flat metal base extends. The metal and wood base has a mattress and military-grade canvas cover, providing a robust tent-like shelter.

The unit is flame-retardant, waterproof, windproof and helps protect from the elements. There are translucent windows that provide light and a view of the surrounding area. By re-folding the unit, the EDAR quickly returns to Day Mode.

EDAR units also provide a sense of ownership and pride to those largely deprived of both.

Down on Skid Row in Los Angeles, there is a 400 percent increase in never-before-homeless families arriving compared to last year. Go figure. Thank you, Masters of Deregulation. The Chapel at the Union Rescue Mission is full of EDARs with families living in them. It made me weep. Go down and see for yourself. Well into the 21st century, if the best our advanced society can do for the hundreds of thousands of homeless human beings — men, women and children — who live among us is the cast-off box our refrigerator came in, what exactly does that say about us?

So I’m a producer and this is a film of life. It is the best film I’ve produced so far. If you want a glimpse of what to me is bigger than an Academy Award, go here, here and here.

And if you’d like to get a man, a woman or a child off damp concrete tonight for a tax-deductible $500, go here. You’ll sleep better. And it will be your best production, too.

BIO Peter Samuelson
Peter Samuelson is the producer of 26 films, including "Revenge of the Nerds," "Arlington Road,” and the Oscar-nominated "Tom & Viv." He is also the founder of the Starlight Children's Foundation, First Star Academies for Foster Youth, and EDAR, Everyone Deserves a Roof. He also co-founded a new purpose-driven, double bottom line media company merging philanthropy and filmmaking into a unique model of development, finance, production, marketing and advocacy.

Peter Samuelson is the producer of 26 films, including "Revenge of the Nerds," "Arlington Road,” and the Oscar-nominated "Tom & Viv." He is also the founder of the Starlight Children's Foundation, First Star Academies for Foster Youth, and EDAR, Everyone Deserves a Roof. He also co-founded a new purpose-driven, double bottom line media company merging philanthropy and filmmaking into a unique model of development, finance, production, marketing and advocacy.
x
Looks like you're enjoying reading