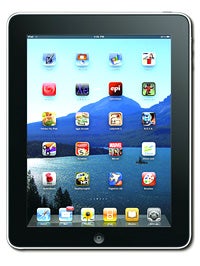 The early reviews are in for Apple’s much-hyped iPad — and they’re downright glowing.

That the iPad is garnering mostly raves from the select few critics Apple allowed to preview the device before it hits stores April 3 is surprising, given the rather abundant skepticism that followed Steve Jobs’ January press conference announcing its launch.

Here’s a selection from around the Web.

After spending hours and hours with it, I believe this beautiful new touch-screen device from Apple has the potential to change portable computing profoundly, and to challenge the primacy of the laptop. It could even help, eventually, to propel the finger-driven, multitouch user interface ahead of the mouse-driven interface that has prevailed for decades.

Months of speculation, feverish lust, an überhyped prize that could disrupt the status quo of computing. You wouldn’t be the first person to compare the run-up to Saturday’s arrival of the iPad to the prelaunch mania that surrounded the iPhone. Apple’s freshly conceived slate-style computer promises to influence the media, mobile entertainment and publishing industries the way its close cousin the iPhone has affected wireless.

The first iPad is a winner. It stacks up as a formidable electronic-reader rival for Amazon’s Kindle. It gives portable game machines from Nintendo and Sony a run for their money. At the very least, the iPad will likely drum up mass-market interest in tablet computing in ways that longtime tablet visionary and Microsoft co-founder Bill Gates could only dream of.

“iPad is pure innovation – one of best computers ever,” Andy Ihnatko, Chicago Sun-Times:

No company can generate as much hype around a product launch as Apple. But that’s perfectly OK because no company is also nearly as successful at producing a new product that can justify almost any level of excitement that precedes it.

They don’t do it with every product launch, but bloody hell: they’ve done it with the iPad.

It’s a computer that many people have been wanting for years: a slim, ten-hour computer that can hold every document, book, movie, CD, email, picture, or other scrap of data they’re ever likely to want to have at hand; with a huge library of apps that will ultimately allow it to fulfill nearly any function; and which nonetheless covers the dull compulsories of computing (Mail, the web, and Microsoft Office-style apps) so well that there will be many situations in which this 1.5-pound slate can handily take the place of a laptop bag filled with hardware and accessories. In fact, after a week with the iPad, I’m suddenly wondering if any other company is as committed to invention as Apple.

It strikes you when you first touch an iPad. The form just feels good, not too lightweight or heavy, nor too thin or thick. It’s sensual. It’s tactile. […] Flick the switch and the novelty hits. Just as the iPhone, Palm Pré and Android phones scratched an itch we didn’t know we had — somewhere between cellphone and notebook — the iPad hits a completely new pleasure spot.

The Apple iPad is basically a gigantic iPod Touch.

The simple act of making the multitouch screen bigger changes the whole experience. Maps become real maps, like the paper ones. You see your e-mail inbox and the open message simultaneously. Driving simulators fill more of your field of view, closer to a windshield than a keyhole. 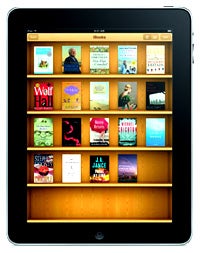 The new iBooks e-reader app is filled with endearing grace notes. For example, when you turn a page, the animated page edge actually follows your finger’s position and speed as it curls, just like a paper page. Font, size and brightness controls appear when you tap. Tap a word to get a dictionary definition, bookmark your spot or look it up on Google or Wikipedia. There’s even a rotation-lock switch on the edge of the iPad so you can read in bed on your side without fear that the image will rotate.

After it was announced back in January, the unfortunately named Apple iPad ($699 direct, 64GB Wi-Fi) seemed like it could be the company’s first major clunker in a long time: An expensive niche product that would inhabit a nebulous region between laptops and smartphones, but wouldn’t quite eliminate the need for either one. Aside from Apple enthusiasts, many of us wondered who would drop hundreds of dollars for this not-quite-computer. But having used the iPad for some time, I can tell you that the device just makes sense. When you combine basic-but-essential work tools with iWork, an improved browser, e-mail, iPod, and photo applications, a well-executed e-Book platform with iBooks, and throw in thousands of downloadable apps and games, and package it all in a gorgeous, slim slate with a beautiful 9.7-inch touch screen, you have yourself a winner.

Is the iPad cheap? No. Is it flawless? Not at all. Omissions including support for multitasking, a built-in camera for video chats, and Flash support in Safari leave room for improvement, but otherwise, the Apple iPad is a very convincing debut. And it will undoubtedly be a driving force in shaping the emerging tablet landscape.