The problem with “Iron Man 2” isn’t just that it’s a loud, frenzied, clanking heap of rusting metal bits that fails to deliver much of the charm, humor or razzle-dazzle of the original 2008 blockbuster.

It’s that huge chunks of the movie, particularly in the second half, merely serve as a long, teasing set-up for “The Avengers,” due in 2012. 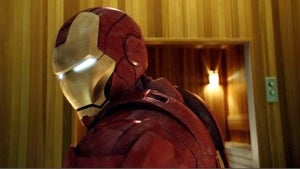 No, “The Avengers” is not a movie reboot of the hip, 1960s British TV series with Diana Rigg, or an attempt to improve upon the disastrous 1998 film version, which starred Ralph Fiennes, Uma Thurman — and, if memory serves, a giant, Day-Glo teddy bear.
This “Avengers” is based on the Marvel comic book series in which a group of superheroes, including Iron Man, join forces to battle evil. Like “Iron Man,” it’s a Paramount project.
So in addition to Robert Downey Jr. returning as billionaire Tony Stark – this time encased in a shiny, red metal suit — we get Samuel L. Jackson as Nick Fury, Clark Gregg as Agent Phil Coulson and, most notably, Scarlett Johansson as a lethal whirling dervish known as Natasha Romanoff, whose more descriptive nom de superhero is Black Widow.
These characters turn up arbitrarily in “IM2,” basically hogging screen time, contributing little to what passes for a plot here.
Remember when Kate Walsh’s hotshot surgeon, Addison Montgomery, took a break from Seattle Grace Hospital on ABC’s “Grey’s Anatomy” to visit old medical school friends in Santa Monica a few years back? Or when Chris O’Donnell and LL Cool J took up a whole episode of “NCIS,” setting up “NCIS: L.A.”? 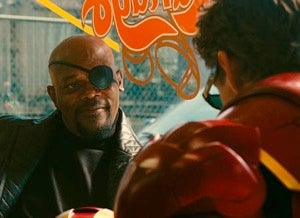 “IM2” is like a TV show that is setting you up for a spin-off. The way Mary begat Rhoda, the Bunkers begat the Jeffersons, “Law & Order” begat “L&O SVU” and then “L&O Criminal Intent,” and the original “CSI,” based in Las Vegas, begat siblings in Miami and New York.
But this isn’t TV. Hollywood deals in sequels, not spin-offs. In movies, sequels continue to follow main characters we already know and love, while spin-offs move minor characters to center stage.
This is like David O. Selznick following up “Gone With the Wind” with an epic about Mammy’s new life as a free woman after the Civil War. (Actually, that’s a film I’d like to see.) Or the Twilight series ditching Bella and her super-sensitive beaus in favor of a drama about her father’s life as a small town police chief.
And, unfortunately, it’s not the only problem with “IM2.”
The original “IM,” also directed by Jon Favreau, became a huge worldwide hit because it appealed to viewers well beyond the fanboy base. That was in large part because of the laughs and flippant charm that Robert Downey Jr. brought to the party.
It was also an origins story, always the strongest card for superhero sagas to play.
The sequel again has Downey bringing his considerable talents to bear — he can throw off comic zingers with the ease of Roger Federer flicking ace serves at Wimbledon. But what it doesn’t have is much in the way of an involving story, and what it does have is confusing and excessively busy.
“IM2,” written by Justin Theroux, has Tony Stark and his Iron Man alter ego facing threats on two fronts: His health is deteriorating because he is being poisoned by the same rare element that gives him his power, and an embittered Russian scientist (Mickey Rourke, who brings little to this party other than multi-hued hair extensions) has created his own version of an Iron Man suit and is out for vengeance against Stark.
The only thing that’s any fun is that Rourke’s character wields dual metallic whips, each of which has a deadly electric current pulsing through it.
As he strides down a boulevard in Monaco, wreaking havoc with his whips during a Grand Prix race, I hoped the movie would reveal that he was really Indiana Jones’ evil twin.
Now there’s a spin-off I’d pay top dollar to see.
x