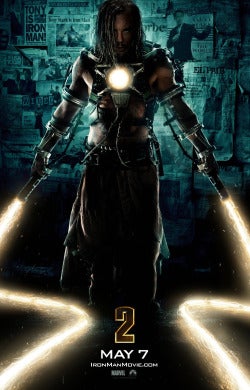 "Iron Man 2" will be released in Imax theaters simultaneously with the film’s May 7 worldwide debut, Paramount, Marvel and Imax jointly announced on Thursday.

“The success of the first Iron Man movie catapulted the franchise from the comic books to theater screens, and we’re excited that the Imax format will offer fans an even more immersive way to experience the sequel,” Tim Connors, Marvel Studios’ chief operating officer, said in a statement.

“’Iron Man 2’ is a fantastic addition to our growing film slate for 2010, which is filling out faster than any previous year,” Imax CEO Richard L. Gelfond said in a statment. “The rollout of our digital projection system has enabled us to add more films to the slate, and we’re very excited to partner with Marvel and Paramount on this next installment of the incredible Iron Man franchise.”