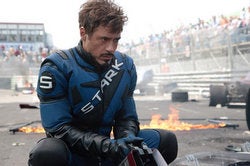 In the spirit of holiday cheer, director Jon Favreau announced Monday via Twitter that the poster for his superhero sequel would be posted at Yahoo at 3 p.m. PST.

Favreau, who is in the process of editing the movie, also posted nine stills of stars Robert Downey Jr. (left), Scarlett Johansson and Mickey Rourke from the upcoming film.

Paramount Pictures’ "Iron Man 2" hits the big screen on May 7.