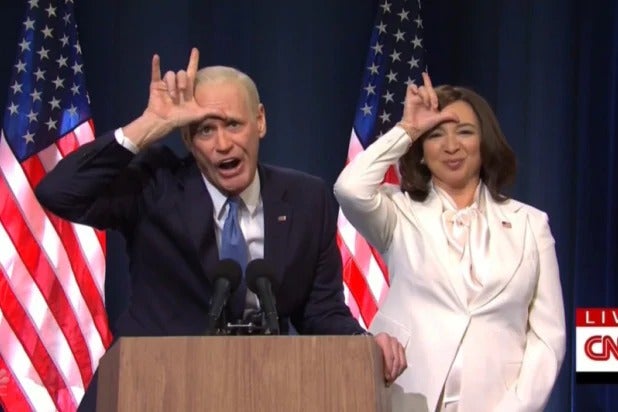 “SNL” is back, now in its 46th season. The most recent new episode, which aired on November 7, was hosted by Dave Chappelle, with the Foo Fighters as the musical guest. The cold open saw Jim Carrey and Maya Rudolph take the stage as Joe Biden and Kamala Harris, respectively, to gloat about Biden’s decisive election victory over Donald Trump. And yeah, Alec Baldwin showed up as Trump to play piano and sing a very sad version of “Macho Man” by the Village People.

Even with it looking like Trump is on the way out we probably shouldn’t expect Baldwin to go away completely just yet — since Trump isn’t actually leaving office until January, and he’s continuing to protest his own election failure in the meantime.

And the good news for those who have enjoyed Carrey as Biden is, well, it looks like we’ll be seeing a lot more of him over the next four years.

And the same goes for Maya Rudolph as Kamala Harris this season. The former “SNL” cast member should be around a lot this year, and I think that’s something just about everybody who watches the sketch show can get behind.

This week, on Saturday, Nov. 28, there WILL NOT be a new episode of “SNL.” The show started season 46 with six straight new episodes, and now it’s time for a few weeks of break.

It’s actually extremely rare for us to get more than three “SNL” episodes in a row without any breaks, but the election was obviously a special circumstance. But the show will return on December 5, when it’ll be hosted by Jason Bateman.

There are, as is usual for off weeks, two reruns on Saturday night. The first, at 10 p.m., is the season 22 episode that was hosted by Phil Hartman, with Bush as the musical guest. Then, as is standard, there’s be a rerun from this current season at 11:30 — this time it’s the episode hosted by Issa Rae, in which Justin Bieber served as the musical guest.

You can be pretty sure this season of “SNL” be very political for the full stretch. This is an election year, and an impossibly hectic one at that, so it’s been hard for any of us to think about anything other than politics. And, well, not many folks are really expecting things to calm down all that much even now that we’re past Election Day.

And “SNL” hasn’t slowed down with its political content, with each cold open in season 46 being about the election. After that debate sketch in the premiere, we got two other debate sketches, one for the VP candidates and one other for the presidential candidates, as well as one about the dueling town halls from when Trump was infected with COVID-19 and refused to submit to safety measures.