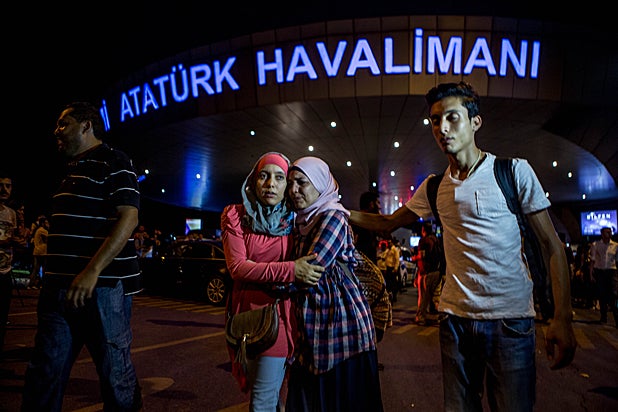 Details about the deadly terror attack in Istanbul, Turkey are still emerging. We know three terrorists armed with bombs and guns attacked passengers at the city’s Ataturk Airport.

Of the three bombers, two were at the international terminal, with the third in a nearby parking lot, a Turkish official told CNN. All three detonated suicide vests at the 11th busiest airport in the world.

Here are the five latest developments in the attack:

The death count continued to rise overnight, with CNN reporting that 41 people were killed and 239 were injured. Among the victims are four Saudi citizens, according to the Associated Press. Ataturk Airport has already reopened.

The victims also include two Iraqis, one Tunisian, one Chinese, one Iranian, one Ukrainian, one Jordanian and one Uzbek, according to CNN.

President Obama spoke with Turkish president Recep Tayyip Erdogan on Wednesday morning, two weeks after the Turkish leader called Obama to offer condolences following the Orlando attack, according to a CNN report. The network says Obama made the call from a plane while traveling to Ottawa.

Russian President Vladimir Putin called Turkish leaders to extend condolences in an attempt to repair relations with the country, according to the AP. Russia is lifting its ban on package tours to Turkey and Putin has ordered his staff to help repair the relationship between the two countries, which have feuded since Turkey shot down a Russian warplane near the Syrian border last year.

“We offer our heartfelt sympathies and condolences to the bereaved families and to the brotherly people and government of Turkey,” Pakistan’s Foreign Ministry said in a statement issued to media, reiterating its regime’s condemnation of terrorism “in all forms and manifestations.”

Afghan President Ashraf Ghani also issued a statement: “The people of Afghanistan feel the pain and suffering of the people of Turkey more than others, as we have been the victim of terrorism for years.”

Israeli President Reuven Rivlin penned a letter to Turkish leadership, offering help, according to the AP.

“I take this opportunity to welcome the chance to renew our good relationship especially because our strengthened dialogue will greatly aid in our joint efforts against this threat, and because it sends a strong message to the terrorists that we will stand united against hatred,” Rivlin said in the letter.

“The terrorists came to the airport in a taxi and then carried out their attacks,” Turkish Prime Minister Binali Yildirim said. “The fact that they were carrying guns added to the toll. Preliminary findings suggest all three attackers first opened fire then detonated themselves.”