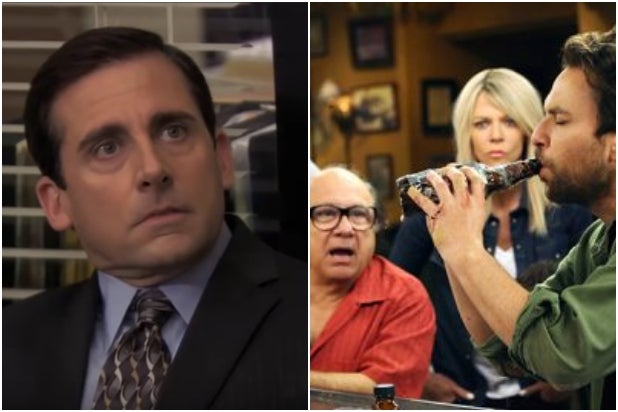 Watch out Dunder Mifflin — Paddy’s Pub is coming to town.

The old filming location for “The Office” has been taken over by another popular comedy that’s still on the air — “It’s Always Sunny in Philadelphia.”

He also posted a video to Instagram of him and his fellow cast mates, Danny DeVito and Charlie Day, yucking it up in the famous Dunder Mifflin parking lot where many a memorable scene from “The Office” was filmed.

“So apparently this is Dunder Mifflin, I guess?” McElhenney says in the video, which you can watch below. “They’re gone now, they’re off the air. Sorry Carell,” he said, referring to Steve Carell, who played Michael Scott on “The Office.”

“You got these guys now,” he says, as DeVito, who plays Frank Reynolds, emerges from his trailer to say “hey” and is quickly joined by Day, who plays Charlie Kelly on “It’s Always Sunny.”

Both “The Office” and “It’s Always Sunny” premiered in 2005. “The Office” ran for nine seasons and ended in 2013, while “It’s Always Sunny” is returning for its fourteenth season on September 25. The latter revolves around a group or morally ambiguous friends who together run a bar called Paddy’s Pub in Philadelphia, while “The Office” was about the workplace dynamics of a failing paper company struggling to adapt to a digitized world.

If it were a competition of popularity, the two shows would be tied. Despite having been off the air for six years, fans of “The Office” have recently been protesting NBC’s decision to remove the show from Netflix in 2021 in order to add it to their own upcoming streaming platform, NBCU.

Although both shows share comedy icon status, McElhenney, as always, is in it for the bit.

“I guess your show got canceled or whatever, but we’re still doing ours. So we’re doing it here,” McElhenney says. Does this mean season 15 is officially happening?

The bar inside Dunder Mifflin is now called Paddy’s.