Over 45 years after they first appeared on the Ed Sullivan Show, 2009 looks like it could be the most lucrative year the Beatles have ever had.

Despite the fact that the Fab Four recorded together as a group for a mere eight years — from 1962’s “Please, Please Me” until their breakup nearly 40 years ago in 1970 — John, Paul, George and Ringo remain a money machine that shows all contenders how it’s done. 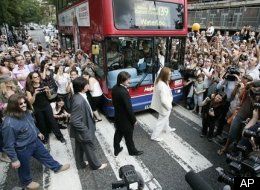 In fact, they have sketched a legacy blueprint that has been adopted by the estates of Elvis Presley and likely Michael Jackson, whose ownership of the publishing of numerous Beatles songs will reap millions this year. (Pictured, fans at the recent 40th anniversary of the "Abbey Road" cover shoot; Getty Images.)
Year after year, Christmas after Christmas, new ways are found to mint money: rarely heard demos or unreleased tracks like “Free as a Bird,” “True Love” and the still unreleased 14-minute improvisational “Carnival of Light”; greatest hits packages and anthologies; reproduced albums like 2003’s “Let It Be … Naked,” where Paul McCartney  stripped off the Phil Specter production he always hated so much; even stage shows like Las Vegas’ “LOVE.” (See accompanying article, "Re-Repackaging the Beatles.")
There’s also a library’s worth of coffee-table books, not to mention the officially licensed coffee mugs, fountain pens — which go for $528.95 on the band’s site — Monopoly and Trivial Pursuit games, Zippo lighters, limited-edition baseball sets and, among much more, throw blankets.
Which brings us to next month.
For starters, on Sept. 9, remastered versions of all 12 of the Beatles’ British albums plus "Magical Mystery Tour" (not an album in the U.K.) will be re-released on CD. It marks the first significant upgrade of the Fab Four’s canon since the records first arrived on CD 22 years ago — and the first time the first four British albums will be available in stereo.
Each disc will feature not only startling clarity revealing every harmony, guitar lick and the studio wizardry of the later years, but also a DVD that includes a documentary on the specific album as well booklets full of unseen photographs and a host of other collectables.
The “special editions” discs, with the music and the embedded documentaries,
will cost about $19 individually or as a luxury box set, retailing for around $260, as well as a 10-disc “Beatles in Mono” set. 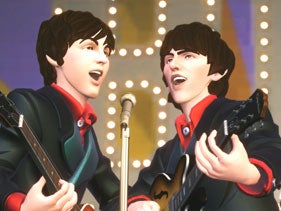 Then, if Beatles fans repurchasing their entire collections isn’t enough to provide a boon for the ailing music biz, on the same day, “The Beatles: Rock Band” videogame will hit shelves.
The long-awaited Beatles version of "Rock Band" also arrives on Sept. 9. Not only will there be the $59.99 version for Xbox 360, Playstation 3 and Nintendo Wii systems, but a deluxe $249.99 customized-instruments-included edition, as well.
“The Beatles: Rock Band” sees the band portrayed visually as well as musically from all stages of their career.
Distinguishing itself from rival “Guitar Hero” — which has had great band-specific success with “Guitar Hero: Aerosmith” and is about to bring out “Guitar Hero: Van Halen” —  game developer Harmonix, which is owned by MTV, has transformed “Rock Band” into a cooperative “platform” with digital downloads that go for around $2 and add-ons as well as game play.
The game will allow up to six players sing and perform in a virtual Beatles band, with 45 song choices.
Having sold over 600 million albums worldwide, the Beatles’ marriage to “Rock Band” — which has had worldwide sales of approximately $1 billion since the franchise debuted in 2007 — looks to be a match made in Rock ‘n’ Roll Heaven, even in this sagging economy and tough times for the $30 billion videogame industry.
Accordingly, the hype machine is in full force.
Coming soon to a TV near you, there’ll be a “Beatles: Rock Band” commercial that depicts the band, in archive footage grafted to computer generated images, enacting their famous photograph walking across Abbey Road with frenzied fans pursuing them.
If you’ve seen Paul McCartney on tour this summer, including topping the bill on the first night of this year’s Coachella Festival, you’ve been watching an unannounced ad for “Beatles: Rock Band.”
McCartney, likely not unaware of the potential online viral spread, has seamlessly incorporated images from the game on to the giant video screens that play behind him when he plays Beatles songs like “Got to Get You Into My Life” live.
On Twitter, Facebook and YouTube, fans have been teased with other images and pre-order exclusives of the game including a segment with the “White Album”-era Fab Four, tinged in blue and yellow, performing "Birthday.”
McCartney also re-created the famous Beatles’ rooftop performance earlier this month by performing live atop the marquee for David Letterman’s “The Late Show.”
On Aug. 9, QVC opened its Beatles Shop, selling pre-orders for both the game and the remasters on TV – as has VH1. Pre-orders for both the standard and the deluxe version of “Beatles: Rock Band” have been “very very healthy,” according to sales staff at Game Stop on Vine in Hollywood.
“The Beatles today are like the U.S. Marines or the New York Yankees,” says brand strategist Claude Singer. “They’re the Cadillac brand of 20th-century rock.”
But this is only the tsunami’s first wave. You still can’t purchase the Beatles catalogue digitally, largely due to decades of trademark and lawsuits between the Beatles’ Apple Corp and the similarly named Apple Computers.
In fact, the first Beatles download ever will be “All You Need Is Love,” through “Beatles: Rock Band” for Xbox LIVE console owners to purchase for around $2, with all proceeds going to Doctor’s Against Borders.
The entire “Abbey Road” album, which is already embedded in the game’s system files, is to follow on Oct. 20. “Rubber Soul” and “Sgt. Pepper’s Lonely Heart’s Band” are also slated for owners of the game to download onto their consoles in the near future.
It’s just a matter of time until Beatlemania hits iTunes — especially once the “Rock Band” and remastered-CD bonanza has run its course. And another Christmas approaches.
In an artfully worded statement on the release of the remastered catalogue, EMI and Apple Corps said “discussions regarding the digital distribution of the catalogue will continue. There is no further information available at this time."
No wonder, once George Harrison’s son Dhani convinced them of the opportunity, Paul McCartney, Ringo Star, Yoko Ono and George’s widow Olivia all participated significantly in both the production of the videogame and the remastered albums.
No wonder, since the game was made public on June 1 at this year’s E3 conference, “the reaction,” Josh Randall, who led the “Beatles: Rock Band” project for Harmonix, told TheWrap, “has been phenomenal.”
Phenomenal — but not surprising, when you consider that 2000’s “Beatles 1” greatest-hits collection sold over 11.4 million copies domestically, according to Nielsen SoundScan, and over 31million worldwide. Not bad for what was basically a remastered and repackaged version of 1982’s 20 Greatest Hits with “Something” tacked on.
Even the soundtrack to the Cirque du Soleil Vegas stage production of “Love” has sold almost 2 million copies.
For brand strategist Singer, the Beatles haven’t even left the marketing launch pad.
“Can the brand be stopped?” he asks. “Never. In 3009 there will be Beatles starships.”
x
Looks like you're enjoying reading