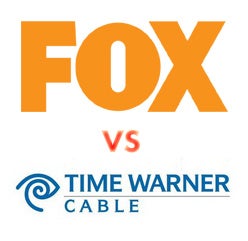 Peace is at hand in the standoff between Time Warner Cable and Fox.

Late Friday afternoon, after marathon negotiations that streched into the New Year, both sides announced a new carriage deal.

Terms of the agreement were not disclosed — so no word yet on how close Time Warner came to meeting Fox’s $1 per subscriber request.

The announcement came a bit over 16 hours past the midnight deadline, at which time Fox was to have gone dark on the cable carrier. But both sides agreed just after midnight to extend the contract a few hours to avoid a New Year’s Day blackout.

Here’s the release issued by both companies:

"We’re pleased that, after months of negotiations, we were able to reach a fair agreement with Time Warner Cable — one that recognizes the value of our programming,” said Chase Carey, Deputy Chairman, President and COO, News Corporation.

“We’re happy to have reached a reasonable deal with no disruption in programming for our customers,” said Glenn Britt, Chairman, President and CEO, Time Warner Cable.

Here’s FCC chief Julius Genachowski on the deal. Government pressure from the FCC and some key senators may have played a role in keeping both parties talking:

Fox and Time Warner have granted a New Year’s resolution of millions of viewers, and I congratulate them.

Now it is the turn of Sinclair and Mediacom to respect the wishes of their audience, and resolve their differences before the expiration of their extended agreement on January 8th. The governing statute contemplates that retransmission terms should be and will be resolved by agreement between private companies, and broadcast and cable companies must accept shared responsibility for any failure to reach a timely deal.

I commend the FCC’s Media Bureau for its yeoman, pragmatic, and consumer-focused work in encouraging yesterday’s extension of the Sinclair/Mediacom retransmission agreement as well as today’s Fox/Time
Warner agreement.

I have very good news to announce as we begin the New Year. Last night, the Fox Networks Group negotiating team secured an agreement in principle for retransmission consent for the Fox Television stations and Fox Network as well as extensive continued carriage for the national cable and regional sports networks whose contracts were expiring on Time Warner Cable systems across the country.

Multiple departments from across FNG including Affiliate Sales and Marketing, Legal and Communications came together and worked tirelessly to secure this unprecedented agreement. I’m honored to work alongside such talented individuals who exhibited incredible strategic thinking and focus during the entire process.

It was a monumental task that was months in planning, and the team worked deep into the final night of the contract…BUT WE GOT IT DONE!

The entire Fox Networks Group team deserves many thanks for their tremendous effort in helping Fox continue as the industry leader, and I salute you all.

With admiration and respect,

And, last but not least, Senator John Kerry (D-Mass.), chairman of the powerful commerce subcommittee on communications, technology and the Internet:

“I applaud the parties for putting consumer interests first by reaching a new carriage contract, and for staying at the table until a deal was cut,” said Sen. Kerry.  “I also appreciate their communications with my office throughout the process.  My sole objective is to ensure that the rules and regulations governing the media marketplace protect consumers.

“Both the broadcasting business and the cable business are expensive enterprises and good faith negotiations should result in mutually acceptable terms to both the seller and the buyer without final consumers being put in the crosshairs.  I am glad that despite some bumps in the road, that was achieved in this instance.  I will reach out to both parties, the FCC, and consumer advocates to assess lessons learned from this dispute and what, if any, changes to law are necessary.  I again extend my appreciation for a positive outcome to the parties and the efforts that the FCC exerted to bring them together.”

For background on the history of the talks, click here.