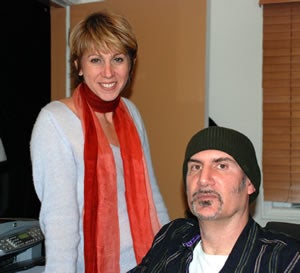 Tonight I got a glimpse of what may be the future of the music industry – independent, micro-entrepreneurship.

Peter Himmelman, a long-established singer-songwriter who has recorded a dozen albums, scored a handful of television shows and toured the world in concert, has gone micro. (Read his guestblog on TheWrap.)

He is now starring in a weekly web show of his own making, Furious World, from the backyard of his house in Santa Monica. He streams it live over ustream.tv. And he’s having the time of his life.

Creativity, independence, flexibility and an opportunity to reach fans directly. This is the opportunity that Himmelman sees in an industry where the old-style business model has evaporated.

“Right now there is no revenue stream at all,” he says, after completing his sixth live show. So far about 11,000 people from as far away as China and Saudi Arabia have logged on to watch the weekly one-hour performances, pretaped features and live interviews with guests (this week I was one).

As a mature performer in an industry where only the Madonnas and Bon Jovi’s seems to have reliable incomes as concert performers, Himmelman hit a wall a few years back. He tried to make and sell an independent movie; that didn’t work. He scored a few tv shows (“Men in Trees,” “Bones”), but that wasn’t creatively satisfying.

And then there was his industry as a whole, which was hardly thriving. One particularly depressed day he read a story about Daniel Pearl, the Wall Street Journal reporter murdered in Pakistan; he was surprised to read that Pearl and one of his best friends had bonded over Himmelman’s music.

The musician got a renewed sense of the power of his own gift, and how to wield it in the age of the Internet. “This is a place where I can play my catalogue,” he said, after the Tuesday night show. “I don’t have to wait for the radio, or some M-Tv thing. I can do it myself. Then I get feedback from fans on the Ustream page.”

Himmelman performs with his band from the studio he built behind his house, complete with two cameras and a sophisticated sound system that means that the sound over the Internet is of super-high quality.

Himmelman is a natural performer – gregarious, funny, warm – in addition to being a great musical talent. But he’s still testing the show; the format included a segment with his pet turtle and a karate teacher with words of wisdom.

“I’m trying to figure out what the show is,” he admitted. But he’s convinced he’s creating the future of his industry, or at least of his own career, by taking it into his own hands.

“I’m going to do this every Tuesday night for a good long while, and I don’t care if there’s two people watching,” he said. “But I do see the day where this becomes a real thing for me, where I do what I really love doing, and where I get compensated.”