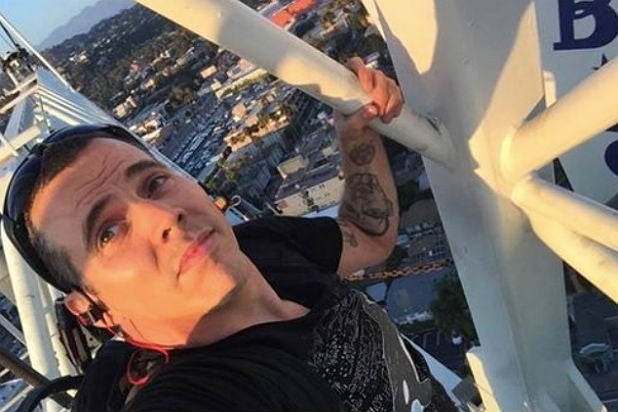 The actor and stuntman faces charges of creating a false emergency, use of unregistered fireworks, storing and possession of fireworks without permit and trespassing, according to the City News Service.

The City Attorney’s Office will also seek restitution. Spokesman Frank Mateljan said city prosecutors were working with the police and fire departments and the owner of the construction site to determine the exact amount.

Steve-O, real name Stephen Glover, was arrested on Aug. 9 in Los Angeles after climbing a 100-foot crane over Sunset Boulevard with an inflatable whale in protest of SeaWorld. He had previously teased the stunt on his official Instagram account when he posted a picture of himself with the inflatable whale.

“This is Shammy,” he wrote. “We’re gonna do a big dangerous stunt tomorrow in Los Angeles that will probably get me in a lot of trouble, and you can watch it happen at 7pm PST via a live stream on my Facebook page.”

Once he reached the top, Steve-O inflated the whale, which had the words “SeaWorld Sucks” written on the side. He also lit fireworks from the top of the crane, which sparked the majority of the charges.

Shortly after, he was arrested and police blasted the stunt, calling it a massive waste of officers’ and firefighters’ time.

He was previously cited in December for adding the word “Sucks” to a freeway sign for SeaWorld outside San Diego.

SeaWorld has faced mounting criticism since the 2013 release of the documentary “Blackfish,” which claims the aquatic park is mistreating their killer whales by keeping them isolated in their tanks — a practice that may be driving them to attack park employees.

If convicted of all charges, Glover faces up to four-and-a-half years in jail and up to $4,500 in fines.

He is scheduled to appear in court Aug. 31.