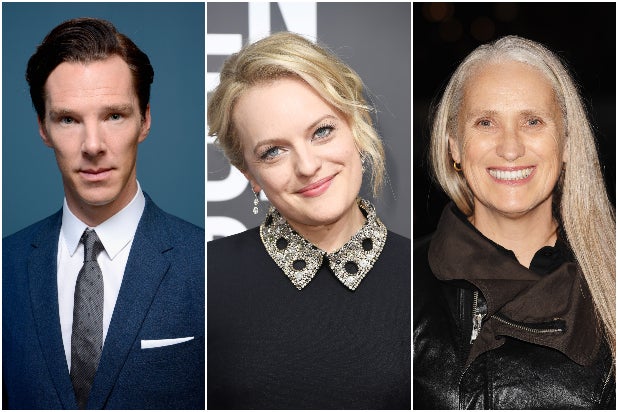 Benedict Cumberbatch and Elisabeth Moss are set to star in “The Power of the Dog,” the next film from Oscar-winner Jane Campion.

Campion has written and will direct the feature film adaptation of Thomas Savage’s 1967 novel of the same name. This is Campion’s eighth feature film, her first since 2009’s “Bright Star” and her first project since the second season of the “Top of the Lake miniseries, which starred Moss.

See-Saw Films’ in-house sales arm Cross City Films will be launching sales at Cannes and will go into pre-production at the end of the year.

“‘The Power of the Dog’ is a sublime novel that deserves a life on the big screen,” Campion said in a statement. “I couldn’t stop thinking about the story, it really haunted me. The themes of masculinity, nostalgia and betrayal are an intoxicating mix. It’s also rare to find a story where the themes, the plot and the characters build tension as they reveal each other and even the end is satisfying and unexpected. It will be the first time I’ve worked with a male lead, which is exciting. Phil is a charismatic and complex character who declares war on his brother’s new wife and her teenage son.”

Wealthy Montana brothers Phil (Cumberbatch) and George Burbank are two sides of one coin. Phil is graceful, brilliant and cruel where George is stolid, fastidious and gentle. Together they are joint owners of the biggest ranch in their Montana valley.  It is a place where men are still men, the rapidly modernizing 20th century is kept at bay and where the figure of Bronco Henry, the greatest cowboy Phil ever knew, is revered. When George secretly marries local widow Rose (Moss), a shocked and angry Phil wages a sadistic, relentless war to destroy her entirely using her effeminate son Peter as a pawn.

“The Power of the Dog” is a See-Saw Films and co-production of Big Shell Films and Max Films Production in association with Brightstar. The project originated with producer Roger Frappier of Max Films, who had the rights to the novel by Savage. After Frappier met Campion in Cannes he offered the property to her as writer/director.

The project has been developed with BBC Films, who are also backing production. BBC Films’ Rose Garnett, See-Saw’s Simon Gillis and Brightstar’s John Woodward will serve as executive producers.

“Working with Jane is an extraordinary experience for producers,” Sherman and Canning said in a statement. “Having completed two series of ‘Top of the Lake’ with her, ‘The Power of the Dog’ is an incredibly exciting move, seeing her delve into a complex and utterly gripping psychological drama that explores the masculinity of the American West in a fresh way. This story is perfect material for the microscope Jane brings to the human condition, and for her unique voice.”

“When I optioned the book, I couldn’t have dreamed of a better writer-director than Jane Campion to bring this excellent story to the screen,” Frappier said in a statement. “Jane has a unique, special touch that elevates this kind of story. I feel lucky to be working with her.”

“We’re over the moon to be supporting Jane in her first feature in 10 years – she has been too long gone from the big screen. This is a brilliant project to herald her return; unique, poetic and totally compelling,” BBC Films’ Garnett said in a statement.

Campion is a Best Screenplay Oscar winner for “The Piano.” That film also made Campion the first and only female director to date to be awarded the Cannes Film Festival’s Palme d’Or.

Cumberbatch was just seen in “Avengers: Endgame,” and his other recent credits include HBO’s “Brexit” and the Amazon series “Good Omens.” He just finished filming “1917,” a World War I drama from director Sam Mendes.

Moss was seen earlier this year in Jordan Peele’s “Us,” “Her Smell” and will next be seen in the third season of “The Handmaid’s Tale” and “The Kitchen.”