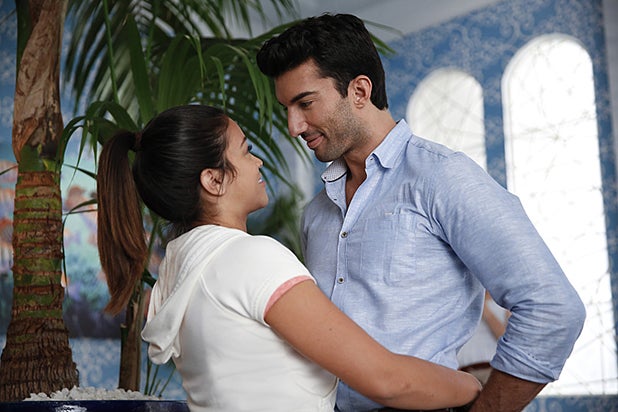 “Jane The Virgin” not only left off in the midseason finale with some crazy cliffhangers, the show itself went on to win a Golden Globe for star Gina Rodriguez in the meantime, and was subsequently renewed for Season 2.

But back in the fictional, soapy world of Jane Villanueva, things aren’t going quite so smoothly – for anyone. With a hurricane bearing down on Miami, the drama goes into hyperdrive.

Last we left off, Jane (Rodriguez) and Rafael (Justin Baldoni) had confronted his soon-to-be-ex wife Petra (Yael Grobglas) about her false identity, Jane’s ex-fiance Michael (Brett Dier) and his partner/current hookup Nadine (Azie Tesfai) had discovered a secret bunker hidden inside a hotel room, and Jane’s grandmother Alba (Ivonne Coll) had been pushed down some stairs by Petra’s mother Magda (Priscilla Barnes), who apparently doesn’t really need a wheelchair.

Here’s five things to expect when things pick back up in Chapter Ten:

Petra’s past comes into focus: In the midseason finale, Jane and Rafael triumphantly put Petra in her place and got her to agree to sign the divorce papers by revealing they know she’s not Petra at all, and the audience is about to find out exactly who Natalia really is. In classic self-referential “Jane” fashion, the show has some fun with flashback tropes here.

Michael and Jane share a moment: As the network has teased, the ex-couple get stuck in an elevator together — in the dark! — during the hurricane. Michael finally gets a moment alone with Jane without her new boyfriend to get in the way, and a chance to prove how well he really does know her and care about her, even now. But will this lead to a reconciliation or just more heartbreak?

Religion creates another obstacle for another couple: Jane’s vow of chastity has stopped her from getting intimate with both of her love interests on the show thus far, and another couple is about to pump the brakes thanks to a sudden religious epiphany — even though they’ve already done the deed before.

Also Read: ‘Jane the Virgin’ Star Gina Rodriguez on Globe Nom: ‘It Gives Us Such an Opportunity to Fly’

Jane and Rafael mix business with pleasure: The independent and morally upstanding Jane will come face to face with the accusation that she may be getting special treatment at work because her boss is also her baby daddy and boyfriend. This will become an especially contentious issue as Rafael is reinstated as the boss at the Marbella and his first order of business is layoffs.

Sin Rostro is closer than ever: The Big Reveal of the mystery drug kingpin behind the murder and mayhem that play out behind the soap opera relationship drama is coming in Episode 13, but the show begins setting it up big time immediately upon its return. That secret bunker Michael and Nadine found at the end of the midseason finale was a big clue. We’ll find out the surprising reason he’s known as the Man Without a Face, and one particularly strong suspect will emerge. Could it be a red herring? Only two more weeks until we know for sure.