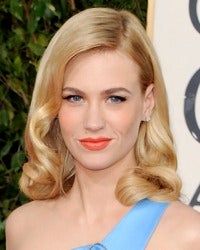 Another day, another run-in between stars and paparazzi.

"Mad Men" actress January Jones was in a car accident on Thursday night that she claims was caused by overzealous paparazzi.

An LAPD spokesperson confirmed that the actress was involved in the accident, that she was not injured and that "no crime occurred."

"She wasn't under the influence," said Officer April Harding with the LAPD's media relations office.

According to Harding, Jones told officers that "she was being followed by the paparazzi and was trying to elude them, and subsequently, hit two parked cars."

The LAPD would not reveal the location of the accident beyond saying that it was in Los Angeles. TMZ reports the crash occurred as Jones returned home after watching the NBA Finals at the London West Hollywood hotel.

TMZ also reported that Jones left the area after the accident, then quickly returned, but the LAPD insisted to TheWrap that "it wasn't a hit-and-run from our reports" and that she had to her nearby home to call 911.

Though the police say alcohol wasn't a factor in the crash, a witness told TMZ that Jones' breath "smelled of alcohol" and that Jones called Food Network chef Bobby Flay, who appeared on scene shortly after.

Flay said he was there but that he had only recently met Jones and wasn't sure why she called him after the accident.

It's the second time this week that Jones had trouble with photographers while traveling around Los Angeles.

On Wednesday, photographers snagged a picture of Jones emerging from a cab wearing the same dress she sported at an event the previous night. The photo caused a mini-scandal among gossip sites assumed it was evidence of a one-night stand.

Jones' publicist had not responded to a request for comment.