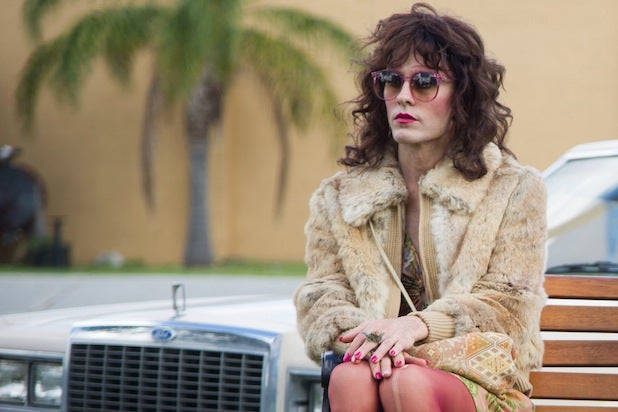 Jared Leto refused to read movie scripts for years before relenting and picking up “Dallas Buyers Club” while on tour for his band.

Now he’s juggling his music career and the roll out for the movie, which features him in an eye-catching role as a transgendered drug addict in “Dallas Buyers Club.”

Leto, lead singer and guitar player in 30 Seconds to Mars, is picking up Oscar buzz for his performance in “Dallas Buyers Club.” The movie’s Los Angeles premiere took place the same week that his band played the Hollywood Bowl, which made for an interesting bit of convergence for Leto.

“The music and movies don’t usually intersect,” admitted Leto in a conversation with TheWrap. “It’s interesting to have it happen now, after all these years.”

The recent intersection only took place, Leto admitted, because the actor who’d made his reputation in films like David Fincher’s “Fight Club” and Darren Aronofsky’s “Requiem for a Dream” finally relented and picked up a script he’d already “blown off” a few times.

In Berlin to play a show, he decided to read “Dallas Buyers Club,” and promptly fell in love with the part of Rayon, a transgendered addict with AIDS who becomes an unlikely ally to Matthew McConaughey‘s Ron Woodroof, a homophobic drug user who’d taken to smuggling unapproved drugs from Mexico to treat his own HIV.

“I still had doubts, so they set up a Skype meeting with the director [Canadian Jean-Marc Vallee],” Leto said. “I decided to use it as an opportunity to explore the character – so after saying hello, I grabbed some lipstick and put it on, and I took off my jacket and had a little pink furry sweater underneath that I pulled down over my shoulder.

“I proceeded to flirt with Jean-Marc for the next 20 minutes or so, and then woke up the next day with the official offer. It was an interesting beginning to an incredible journey.”

Leto, whose band has sold more than 10 million albums over the past decade immediately put his music career on hold, and began losing weight and meeting with transgendered people who, he said, welcomed him with open arms.

“The role demanded everything that I had,” he said. “It wasn’t only the 30 or 40 pounds lost. It was everything. It was the complete immersion in the character.”

Typically for Leto, that immersion included staying in character during the entire shoot, never speaking to Vallee or co-stars Matthew McConaughey and Jennifer Garner in his real voice.

“Maybe a better actor than me would be able to recall all of the behavior, the physicality, the emotional state of the character as soon as the director said ‘action,'” he said. “But that certainly wasn’t the case for me.

“It was hard to let go. I mean, I lost 30 or 40 pounds and I waxed my whole body, including my eyebrows. And when you inhabit that kind of character for such a long time, you’re creating habit. And habit’s hard to break.”

By the end of the shoot, he said, he was occasionally dreaming as Rayon.

The role marked the third time Leto has undergone dramatic weight transformations for a film: He lost nearly 30 pounds for “Requiem for a Dream” in 2000, then gained more than 60 to play John Lennon’s killer, Mark David Chapman, in 2007’s “Chapter 27.”

He doesn’t think he’ll do it again: “It’s a very difficult and sometimes dreadful thing to do, but I was playing a character who was addicted to drugs and dying of AIDS, so it was a necessity.”

Then again, Leto may not even know it if another director wants to offer him the opportunity for a transformation: He said he hasn’t read another script since finishing “Dallas Buyers Club.” Apparently, music beckons once more.