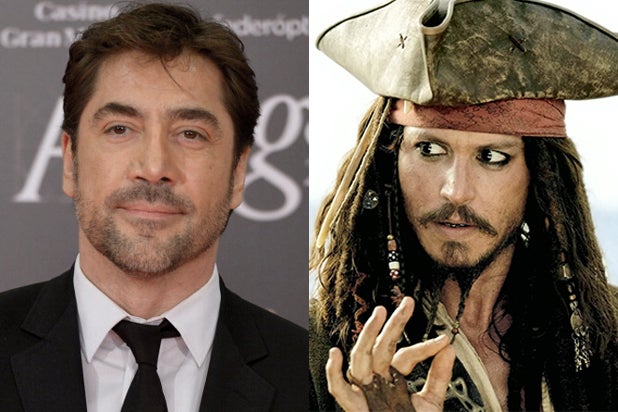 Javier Bardem is in early talks to play the villain in “Pirates of the Caribbean: Dead Men Tell No Tales,” multiple individuals familiar with the Disney sequel have told TheWrap.

A representative for Bardem did not immediately respond to a request for comment, while Disney had no comment.

“Kon-Tiki” filmmakers Joachim Ronning and Espen Sandberg are directing the fifth film in the blockbuster “Pirates of the Caribbean” franchise, which has grossed $3.7 billion worldwide, making its next voyage a top priority for the studio.

Christoph Waltz had been rumored to play the film’s villain but Bardem currently holds the offer and is in discussions to tackle the part of Captain Brand, a ghost bent on revenge against Capt. Jack Sparrow, who he holds responsible for the murder of his brother.

Geoffrey Rush is expected to reprise his role as Barbossa, who could team up with Capt. Brand. Other returning cast members will likely include Ian McShane and Stephen Graham, and there could be cameos from Orlando Bloom and Keith Richards as well. There’s also room for significant new characters including a British soldier and a young girl he hopes to protect.

Bardem may have been sold on the idea of the new “Pirates” movie by his wife, Penelope Cruz, who starred in “Pirates of the Caribbean: On Stranger Tides.” Insiders also say he’s intrigued by the idea of working with the “Kon-Tiki” directors, who created gorgeous visuals for that film on a limited budget.

Also read: ‘Pirates of the Caribbean 5’ to Film in Australia

Bardem is no stranger to blockbuster villainy, having played the dastardly Silva in the last James Bond movie “Skyfall.” He also won an Oscar for his riveting performance as Anton Chigurh in “No Country for Old Men.”

Jerry Bruckheimer is returning to produce “Pirates of the Caribbean 5,” which starts filming in February in Australia. Disney will release the latest sequel in July 2017.

Bardem, who next stars opposite Sean Penn in “The Gunman,” is currently working with the actor-director on the romantic drama “The Last Face,” in which he stars opposite Charlize Theron. Bardem is represented by WME.