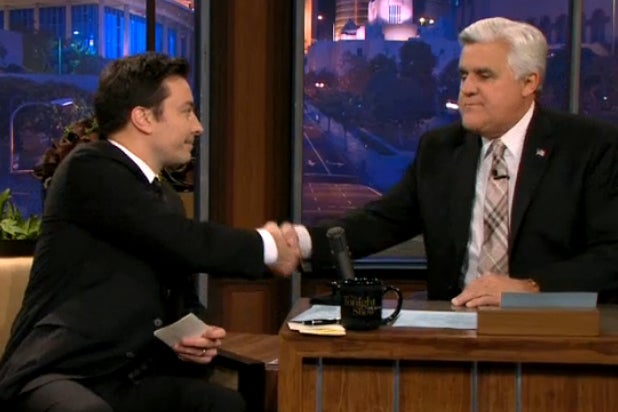 Jimmy Fallon barely made it out of stormy New York City to his Monday “Tonight Show” appearance in Burbank, Calif., where he kicked-off Jay Leno‘s final week hosting the iconic NBC late night talk show. When his plane landed, the jokes flew.

“Jimmy Fallon is here tonight — he’s not here to talk, he’s helping me pack,” Leno started in on his network protege during the monologue.

“Jimmy starts the new ‘Tonight Show’ on the 17th, and it’d be a shame if there was some sort of an accident [where] he was not able to … fulfill his duties as host,” Leno added, tugging on his tie knot.

Following the monologue roasting, Leno teased the younger comic about his Men’s Health magazine cover; though soon the veteran 11:35 p.m. host let his protege shine by showing off one of the popular segments that Fallon is bringing with him from “Late Night” to “The Tonight Show” later this month: “Thank You Notes.”

Upon hearing the lovely opening piano keys to intro the skit, Fallon asked bandleader Ricky Minor what his group is up to in two weeks. “Oh they’ll be looking for work,” Leno quipped. “They’re actually washing cars at my garage.”

“The nicest guy in the business!” Fallon exclaimed.

Then the incoming host began penning his cards of gratitude:

“Thank you, Jay Leno, for passing the torch to me — hopefully it doesn’t get intercepted by a Seahawk,” Fallon read aloud.

After putting that card away, Fallon continued: “Thank you, Jay, for teaching me how to be a late night host, but was it really necessary for me to wax on/wax off your entire car collection?”

And another: “Thank you, Jay for giving me such great advice for ‘The Tonight Show,’ like, ‘You don’t need a monologue’ and ‘Have you ever thought about getting bangs?'”

The final note was a serious one: “Thank you, Jay Leno, for carrying on the proud tradition of ‘The Tonight Show’ host with such humor and class and for being nothing by gracious and generous to me over the past years. I will do my best to make you proud every single night.”

“Well I think you’ll do a great job,” Leno replied, as the two shared a handshake.

Leno’s final “Tonight Show” is on Thursday, when his guest will be Billy Crystal. Fallon takes over on Feb. 17 with guests Will Smith and U2.