How Fans Fight to Save a Franchise: ‘Alita: Battle Angel’ Is the Latest Battleground

After TheWrap requested comment, Penske updated its original story from February 2018 to disclose the investor

For months I’ve been mystified by Jay Penske’s silence over the $200 million investment stake his company, Penske Media Corporation, took from a Saudi government-backed company in February 2018.

Since the murder and dismemberment of Washington Post opinion writer and Saudi dissident Jamal Khashoggi in October 2018, Saudi Arabia has become persona non grata in the world of media and entertainment if not in our government. U.S. intelligence reports confirm that Crown Prince Mohammed bin Salman himself ordered Khashoggi killed.

Endeavor, the parent company of talent agency WME and sports conglomerate IMG, found its own $400 million investment from the Saudi Public Investment Fund untenable. The Hollywood company returned the investment in March of this year.

The United Kingdom just opened a state inquiry into a Saudi businessman’s investment into two of its newspapers, the Independent and Evening Standard, because of concerns over foreign interference.

And just last week, Nicki Minaj pulled out of a planned concert in the kingdom after facing criticism for agreeing to perform in a country accused of human rights violations and backward treatment of women.

After TheWrap requested comment for this story on Friday, a Penske spokeswoman sent an email accusing TheWrap of “desperately trying to ‘create a story'” but did not otherwise address the issue. Meanwhile, Penske Media’s WWD.com posted an updated version of its original announcement of the Saudi investment, this time noting that it came from the Saudi Research and Marketing Group (SRMG). (Previously, even Penske’s own Rolling Stone and Variety have mistakenly reported the source of its parent company’s funding.) 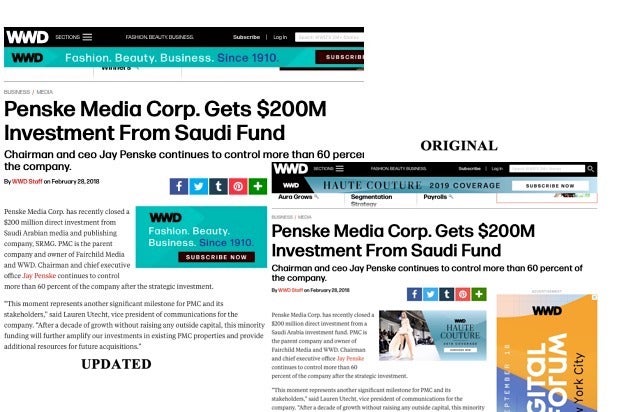 Multiple stories on Variety.com that disclosed the investment have been updated to identify SRMG within the last week, following TheWrap’s inquiries, according to the Internet Archive. Variety did not immediately respond to a request for comment.

Penske Media, which employs hundreds of journalists at Variety, Rolling Stone, Deadline, The Robb Report, WWD and others, has never publicly addressed the investment tie to the regime, either to defend or explain it.

SRMG owns newspapers, an advertising division and a printing division all mainly based in the Middle East; publications include the business daily Al- Eqtissadiah and Sayyidati, a women-focused weekly. Last year SRMG pursued talks with Vice to create a joint venture around media projects, part of an initiative to “build an international media empire to combat the kingdom’s rivals and remake its image in the West,” as the Wall Street Journal reported at the time. Those talks foundered after Khashoggi was killed.

Vice’s ongoing relationship with SRMG could prove problematic as the publishing company is known for having ties to the Saudi government. SRMG ranks as the Middle East’s largest publishing company. It’s listed on the stock market and has two main shareholders: the Al Ahli Capital Fund and Al Ahli Capital Fund 4, which are operated by the National Commercial Bank, a prominent Saudi bank mainly owned by the Saudi government.

According to SRMG’s 2016 annual report, the most recent one publicly available on its website, the company had revenues of 1.4 billion riyals, or about $385 million — and produced a net loss of 56 million riyals, or $15 million.

Multiple experts in the region regard the company as an arm of “soft power” of the Saudi government. Although 30% of its shares are publicly traded on the Saudi stock market, according to the company, it is majority-owned by the Saudi government via two funds titled al-Ahli. The main investor in al-Ahli, according to its website, is the Saudi Public Investment fund. And until last year, SRMG was headed by Prince Badr bin Abdullah — a confidante of Crown Prince Mohammed bin Salman – who went on to become the country’s first culture minister.

“It’s an area of recruitment for those people that the crown prince wants to be drawing into the government. Younger, more avant-garde,” Middle East expert Dennis Ross, William Davidson Distinguished Fellow at the Washington Institute for Near East Policy, told TheWrap.

All of which raises a couple of questions:

• Why is Penske so reluctant to address the investment from SRMG?

• And why would Saudi Arabia — or a money-losing company tied to the Saudi government — be interested in a massive investment in U.S. media at a time when the media business is so deeply challenged as a financial investment, as anyone will tell you?

SRMG did not respond to two attempts to clarify its Penske investment, which is not listed anywhere on its website.

In his recent trips to Saudi Arabia, Ross said he’s seen changes, including the mixing of men and women in restaurants and at work. The Saudi crown prince “is carrying out a revolution from above,” Ross said. “His answer to resistance is to be quite authoritarian and not to tolerate dissent. There’s a tension there inherently. He wants a climate of innovation. But if people are constrained, afraid — it’s hard to do that. You have an authoritarian modernizer.”

He added:  “Now you’ll have meeting and a minister will have two or three women with him. You’d never see that before,” he said. “But I’m the first to admit it’s a dilemma. On the one hand, creating a successful model of development is hugely in our interest. The question is, can authoritarianism as it is being applied put that transformation at risk? And is there a role for us to play?”

As for how American media companies should behave toward Saudi investors, Ross was clear: “My instinct would be to create the ground rules based on your own principles: ‘You have no say over what we do. We will operate the way we operate.'”

When Bloomberg set up a joint venture with SRMG last September for an Arabic-language news service, the American company set strict editorial rules. According to the Guardian, Bloomberg can terminate the contract over any content deemed “deliberately offensive to any racial or ethnic minority” or “therwise bringing Bloomberg into business disrepute.”

And what of all the cloak and dagger in the case of the SRMG investment in Penske Media? On that, Ross was unequivocal. “There has to be transparency,” he said. “If there’s no transparency I’d be much less inclined to go along with it.”

As of Friday, at least, there is a start of some transparency.