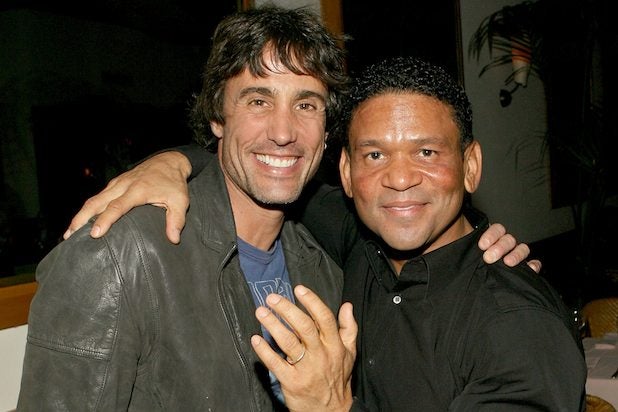 Jeffrey Ian Pollack, a producer of Will Smith‘s 1990s sitcom “The Fresh Prince of Bel-Air” and director of 1997 Jamie Foxx comedy “Booty Call,” was found dead Monday morning in Hermosa Beach, Calif. He was 54.

An autopsy is pending to determine cause of death, a spokesman from the Los Angeles County Department of Coroner told TheWrap.

A female jogger found Pollack’s unresponsive body, dressed in jogging clothing and equipped with an iPod nano playing the Eagles music, on the greenbelt near 30th Street, according to Easy Reader News. Hermosa Beach Police Department Captain Tommy Thompson told the outlet that although the cause of death has not yet been determined, foul play is not suspected.

Pollack (pictured above, left) was born in 1959 in Manhattan Beach, Calif. and graduated from University of Southern California Film School in the early 1980s before he began serving as a co-producer on “The Fresh Prince of Bel-Air” in 1990, and eventually co-executive producer in later seasons.

In 1994, he wrote and directed his first feature, “Above the Rim,” an urban basketball drama starring rapper Tupac Shakur. His second directorial effort, “Booty Call,” starred Jamie Foxx and Tommy Davidson as two sexually frustrated friends trying to break a dry spell. The final feature he directed, 1999 comedy “Lost & Found,” starred David Spade as a man who kidnaps his neighbor’s dog in order to win her heart.

Pollack partnered with Benny Medina (above, right) — the real-life inspiration for Smith’s “Fresh Prince” character — to form management and production company Medina/Pollack Entertainment, which became Handprint Entertainment. The company closed in 2008 after the departure of clients including Jennifer Lopez, Tyra Banks and Mariah Carey.