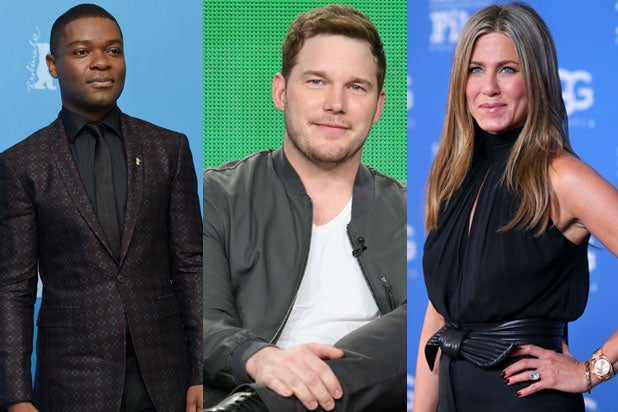 Airing live from the Hollywood’s Dolby Theater on February 22, the ceremony will be hosted by Neil Patrick Harris.

For Aniston and Oyelowo, the bookings are a chance to show that they have no hard feelings over the failure of the Academy’s Actors Branch to nominate them for their roles in “Cake” and “Selma,” respectively. The two were among the most high-profile “snubs” of Oscar nomination morning.

And for Travolta, the telecast could provide an opportunity for redemption — or a chance to publicly apologize, or at least poke a little fun at himself, on the same stage where the “Pulp Fiction” star famously introduced Idina Menzel as “Adele Dazeem” at last year’s Oscars.

First-timer Oyelowo will present and also represent his Best Picture nominee “Selma,” as will Miller for “American Sniper.” Though she is far better known as a TV star (on “Scandal,” a show that airs on the Oscars’ home network, ABC) than a film actress, Washington is a returning Oscar presenter. She introduced Pharrell Williams in 2014 for his performance of”Happy,” and managed to get his name right.

Pratt, the star of the Oscar-nominated “Guardians of the Galaxy,” will further carve out A-list status by gracing the Academy stage, and garner some decent facetime in promoting “Jurassic World.”