Jennifer Siebel Newsom, wife of Gov. Gavin Newsom and one of several women testifying against Harvey Weinstein in his Los Angeles rape trial, took the stand Monday afternoon for the prosecution, where she told the jury about an assault she alleged happened in 2004 or 2005 through fits of sobbing, hysteria and extreme emotion.

Wearing a blue dress and camel-colored coat, and with two men wearing security-type earpieces sitting in the front row of the gallery, Newsom took the stand just before a lunch break Monday. With prosecutor Marlene Martinez questioning, Newsom broke down in tears just a few minutes into her testimony when asked if she saw Weinstein in the room. 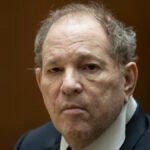 Newsom testified that they first met in the early evening in 2005 at the Toronto Film Festival.

“I was with a bunch of peers, friends at this gathering. I believe in a hotel. I was huddled in a hotel area with some friends, guy friends who were in the industry in various ways, and a girlfriend I was working on a project with,” she said. “Something kind of happened and there was this big person coming toward me, and everybody sort of like backed away. Then Harvey Weinstein introduced himself to me.”

Newsom said at the time, she was working on becoming an actress, having just booked a few small roles, none all that notable.

“He came directly to me and people sort of backed off. He wanted to know who I was, what my name was, why I was there.” She said everyone she had been hanging out with quickly peeled away.

“It felt like the red sea was parting. I don’t know if it was deference or fear … I felt a bit intimidated. He was charming. He treated me initially like he was really curious about me. Maybe flattered is how I felt?”

She said Weinstein told her he wanted to meet, and “I felt like there was a genuine interest in talking about my work.” She said they met at a public bar for that first meeting, and she brought along a friend.

“One thing that was interesting is that he was very charming. He saw that I was smart, even though I clearly can’t do math anymore,” she said. “He was really focused on telling me I was special and I was different.”

After a lunch break, Newsom took the stand again, looking poised, self-assured and in control – until she began to describe the rape itself. At points hysterical and even incoherent with emotion, she began with a familiar tune: Weinstein invited her to meet him at the Peninsula to discuss her projects.

Assuming they would meet at a bar, she was surprised and “a little nervous” when an assistant opened the door and told her to sit on a couch, with silver room-service domes and a champagne bucket on a nearby table.

“It felt a little bit like a date,” she said.

She said he came in wearing a suit and “in a hurry,” sat down next to her and said: “I’m going to go and get more comfortable.” She said he went into the bathroom and soon called out: “Can you help me?”

Martinez asked what she saw. Newsom took a long pause and inhaled deeply.

“He was bent down and there was this bright light and he was in a bathrobe … I thought maybe he was hurt and then I saw him touching himself,” she said, fully sobbing. “and he grabbed my breasts and tried to get me to touch him, saying “Come here” as she tried to back away.

“I was just frozen,” she said. “I was scared that he could assault me in some way, force me to do something sexual.”

She said at first she was trying to be polite, saying “No, no, I’m sorry, it’s OK, please don’t.'” She said she was trapped – as she backed away, he would advance “like a cat and mouse thing.” Then she said he grabbed her and pulled her toward the couch.

“He started talking to me about his childhood, his mother, his brother … then he was holding onto me and talking about his ex-wife and how I reminded him of her,” she said, crying again. “It was all about his needs. I tried to tell him how I lost my sister when I was younger, to tell him I was a human and not this object.”

As others have testified before, Newsom said Weinstein mentioned several well-known actresses, and that “‘this is the industry’ … he made me feel like I had no power, like I was trapped. That’s when he lifted or dragged her to the bed, she said, and tried to push her onto it while continuing to touch himself.

Her crying turned to loud, adamant hysteria as Martinez asked if his put his fingers inside her.

“Yes, Yes! His fingers are in my vagina! … He’s so focused on his penis and getting an erection. Part of his penis was inside me,” she said, so distraught that it was hard to make out her words. “He pushed me back on the bed. … I’m so scared I’m going to get a disease. His penis is so weird and messed up!”

“He was so big and aggressive and determined. This was hell! … He pushes me around, throws my dress up on the bed and he puts his tongue in my vagina.”

She said the whole time she was crying, trembling, shaking – “then he climbs up and sticks his penis in again and he’s kind of at an angle. I found the strength to move over to the side and I used my hands on his penis to make him stop.”

When that didn’t work, she said she acted as if she was enjoying it and making “pleasure noises” to get him to pull out and ejaculate.

In the immediate aftermath, she said, “there was silence on my part. I just wanted to get the fuck out of there.”

She said he was saying things like “Maybe we can be boyfriend and girlfriend … I just thought I was going to throw up.”

“I was just quiet,” she said, recalling that she said something like “I have to go” before putting on her underwear and leaving. 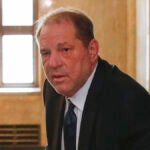 Also Read:
Weinstein Defense Grills Massage Therapist on Why She Kept Going to Harvey’s Room Alone: ‘My Ego Forced Me To!’

Last month, Siebel Newsom disclosed through her attorney that she was one of five “Jane Doe” witnesses who would testify against the disgraced producer. It is customary not to reveal accusers’ names or identities unless they come forward voluntarily.

“Like many other women, my client was sexually assaulted by Harvey Weinstein at a purported business meeting that turned out to be a trap,” Siebel Newsom’s attorney, Benjamin Fegan, said in an October statement to the media via ABC 7. “She intends to testify at his trial in order to seek some measure of justice for survivors, and as part of her life’s work to improve the lives of women.”

In pretrial motions, Weinstein’s lawyers sought to tell the jury that she reached out to Weinstein for advice years after the incident, asking him how to handle negative press around a sex scandal that was enveloping her then-San Francisco Mayor boyfriend.

Weinstein lawyer Mark Werksman read one of Siebel Newsom’s emails in the October pretrial hearing: “Harvey, regarding the press thing, I was calling because I wanted some advice” about a San Francisco Independent article that “says something she didn’t say.” Werksman said the 2007 article had revealed an affair that Gavin Newsom had with a married campaign aide before he began dating Siebel.

Immediately following the article’s publication, Newsom admitted to a 2005 affair with Ruby Rippey-Tourk, wife of his then-campaign manager and close friend Alex Tourk, when she was Newsom’s appointments secretary. Newsom began dating Siebel in September 2006, and they were married in 2008.