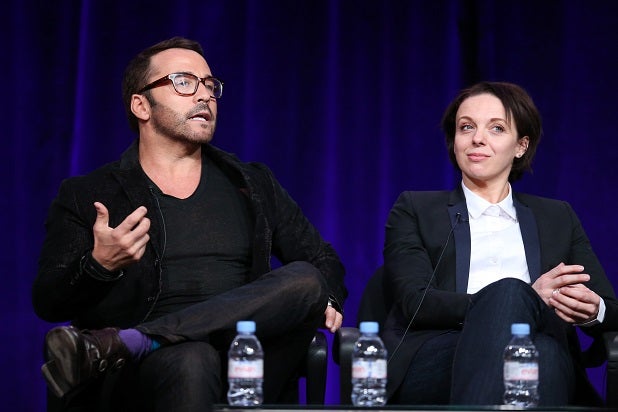 What do department-store owner Harry Selfridge and manic entertainment agent Ari Gold have in common?

Not much, as it turns out. At least, according to Jeremy Piven, who plays both men.

Piven was on hand at the Television Critics Association press tour in Pasadena, Calif., on Monday to talk about the new season of PBS’s “Mr. Selfridge,” which premieres March 30. While there, he discussed the differences between his titular character on the series and his “Entourage” character Ari Gold, which he’s reprising for the upcoming big-screen version of the HBO series.

“It’s interesting, because they’re obviously both Americans and entrepreneurs — pioneers in their own way. I think where Ari leads with an iron fist and he’s a slave to his urges … he’s very reactive. Ari has an anger disorder, and works on his lowest level as a human being in a way that he’s constantly reactive, overly emotionally invested, if you will,” Piven offered. “And Harry, his first instinct is to always take the high road and to embrace the light and lead by example. Ari Gold, to play, is incredibly taxing, because if you’re screaming 12 to 14 hours a day and breaking computers, your body thinks it’s real. So, it’s been really great to play Harry because he has this huge heart, but interestingly enough Ari is all bark and no bite. Whereas Harry, at work, he couldn’t be more professional and loves all of his employees and has a very special relationship with them, and his employees stayed with him forever, which is really, really rare. And then when he’s not at work, he is a bit of a slave to his demons, and is a risk junkie and cheats on his wife and gambles and does all of these things. So his bite is worse than his bark. So they’re actually ultimately polar opposites of each other.”

The second season of “Mr. Selfridge” picks up five years after the first season left off, at the beginning of World War I. Writer Kate Brooke said that the decision to jump ahead was a natural one, as it was a pivotal period in the life of the real-life Harry Selfridge, who died in 1947 at age 89.

“It seemed to make sense to us to set it right at the beginning of the war, because that was a very intense time for the real Harry Selfridge,” Brooke offered.

In addition to chronicling a crucial period in Selfridge’s life, the time jump will also give the series an opportunity to test the other characters’ mettle, Piven added.

“[Selfridge] went out on a limb, and this really happened, to let all of his employees know that they’ll have their jobs waiting for them when they get home from the war, and that was really unheard of at the time,” Piven noted. “So we get to show who has to step up, whether it’s folks of an advanced age or women doing men’s jobs or whatever … at the time, they thought they were going to bloody some German noses, not knowing the consequences. And so we show that.”

Maybe they can hug it out if it gets to be too much.